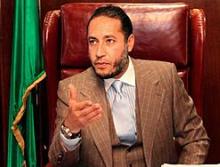 Libya demanded Niger hand over one of Moammar Gaddafi’s sons who is under house arrest in the neighboring African nation after he warned in a television interview that his homeland was facing a new uprising.

Mohammed Hareizi, spokesman for the ruling National Transitional Council, said Saturday that Niger must extradite Al Saadi Gaddafi and other ex-regime officials to ‘preserve its relationship and interests’ in Libya.

The demand came days before the first anniversary of the Feb. 17 start of the uprising that led to months of civil war and the eventual ouster and death of the longtime Libyan leader. Al Saadi Gaddafi and more than 30 other loyalists fled to Niger after Tripoli fell to rebels in September.

Gaddafi’s son told Al Arabiya TV in a telephone interview that supporters of his father’s ousted regime ‘are suffering tremendously’ in Libyan prisons at the hands of the country’s new rulers. He also said his return to Libya was imminent.

He said he is in contact with people in Libya on a daily basis and claimed ‘70 percent of Libyans are unhappy with the current circumstances. They are ready to cooperate to change these conditions.’

Gaddafi’s son pointed to the proliferation of weapons in the oil-rich North African nation as many former rebels have refused to lay down their arms. He said Libyans were tired of widespread chaos.

‘There is an uprising that will happen everywhere in the country,’ he told the station. ‘This will be a new popular uprising.’

He called the new leadership a group of gangsters who are unable to control the various militias in the country. But he also said he was in touch with members of the NTC, which is governing the country until presidential elections can be held, and militia members. The NTC denied Saturday it has been in touch with Gaddafi or any of the former regime officials.

The interview infuriated Libya’s leadership. Hareizi said the head of the NTC Mustafa Abdul-Jalil and Libya’s foreign minister had discussed the issue with their counterparts in Niger and ‘stressed that they will not tolerate the issue and they will take firm measures.’ He didn’t elaborate.

Al-Saadi Gaddafi’s comments echoed complaints about the state of the Libya as the new leadership struggles to impose its authority over the vast desert nation since Gaddafi’s regime was overthrown and the autocratic leader was captured and killed on Oct. 20.

International human rights organizations have complained of rampant torture of inmates in makeshift prisons operated by militias accused of seeking to exact revenge against the slain leader’s former supporters. According to the UN various former rebel groups are holding as many as 8,000 prisoners in 60 detention centres around the country.

Libya’s new leaders have promised to step up efforts to rein in the gunmen.

Another Gaddafi son, Seif Al Islam, was arrested in November by fighters in Libya’s remote southern desert. He has been held largely without access to the outside world ever since and Libyan authorities say they want to put him on trial at home, despite an arrest warrant issued by the ICC.

Al-Saadi Gaddafi is not wanted by the ICC but is the subject of UN sanctions. He fled to Niger in September soon after the Libyan capital Tripoli fell to rebels.

Known for his love of professional soccer, Gaddafi’s son reportedly had a colorful past that included run-ins with police in Europe, drug and alcohol abuse.