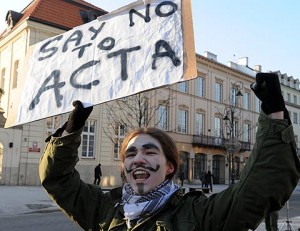 Tens of thousands of Europeans braved bitterly cold temperatures to rally against a controversial treaty intended to protect intellectual property.

Anger spilled into the streets of European cities, from Sofia and Vilnius to Prague and Paris to voice displeasure with ACTA, the Anti Counterfeiting Trade Agreement.

The treaty had been under negotiation for years, and countries like the United States, Japan and South Korea say it is needed to protect the rights of musicians, filmmakers and even clothing and pharmaceutical companies. But in the past few months it has come under increasing criticism from young people in Europe who say it will lead to online censorship.

Some protesters, like Jan Hulek in Prague, also voiced complaints over how the treaty has been ratified.

“The main issue why I am here is because ACTA was accepted without people knowing it. We didn’t know ACTA was going on and there should be discussion before we accepted it. There wasn’t,” Hulek said.

Others, like Act Up Paris President Frederic Navarro, say the treaty’s negative impact will be felt throughout the world.

“Eighty percent of Africans who have AIDS are treated with generic medicines made in India. If this agreement [ACTA] is signed, they won’t have any access to generic medicines and will die while the pharmaceutical laboratories are making profits on our lives,” said Navarro.

Australia, Canada, Japan, Morocco, New Zealand, Singapore, South Korea, and the U.S. signed ACTA this past October. And more than 20 European Union members approved the deal last month. But several countries, including Germany, have pulled back from officially signing onto the treaty as the protests have begun to intensify.

Last month, several of the world’s best known Internet sites staged an online blackout to protest anti-piracy legislation before the U.S. Congress. Critics at organizations such as Wikipedia and Google said the Stop Online Piracy Act (SOPA) and the Protect Intellectual Property Act (PIPA) would censor the Web and threaten freedom of expression.