Iranians worry about possibility of war 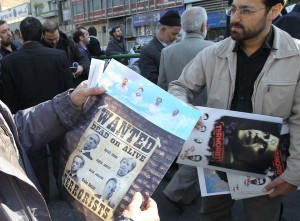 The deepening standoff between Tehran and the West over Iran’s nuclear program has Iranians chatting nervously in butcher shops, grocery aisles and money exchanges.

In a Tehran supermarket, Ali and his wife, a well-to-do couple in their 40s, were filling cart after cart with bags of groceries, prompting a bottleneck at the counter. When asked by other shoppers why he was buying so much, Ali responded he was stocking up for “when the U.S. will come and bombard” the Islamic Republic.

“I mean it,” said Ali, who like many here would not give his last name. He pointed at other frowning customers. “Look at the faces of people here. They are worried.”

The U.S. and its allies suspect Iran is trying to develop a nuclear weapon, but Tehran insists its program is for solely civilian purposes. Earlier this month, Iran announced that it had begun to enrich uranium at a new underground bunker. Secretary of State Hillary Rodham Clinton condemned the decision, saying it put Iran “a significant step closer” to gaining the ability to produce weapons-grade fuel.

On Jan. 11, an Iranian nuclear scientist was killed in a Tehran car explosion, an act that Iran’s supreme leader says was orchestrated by U.S. and Israeli spy agencies. The killing came shortly after Israel’s military chief of staff, Lt. Gen. Benny Gantz, warned that the Islamic Republic could expect “unnatural events” taking place in 2012.

Iran has threatened to respond by closing the strategic Strait of Hormuz, through which 20% of the world’s crude oil is shipped. The U.S. has said it will act to prevent such a move.

“I am worried about war,” Farkhondeh, 55, said as she shopped for vegetables in a Tehran street stall. “The enmity between Iran and West is far from over, and two sides do not seem to be willing to defuse tensions…. Why should I not be worried?”

Mohammad Davoudnejad, a Tehran butcher shop worker in his 30s, said he was concerned about the threat of military action but complained he couldn’t keep track of all the statements being made by various players because TV signals have been jammed.

“What do you think?” he asked. “I am not able to figure out who is saying what. BBC Persian at our home is jammed. I don’t know for sure whether to be worried or not.”

Sanctions combined with more diplomatic pressure appear to be Washington’s preferred formula for handling its row with Iran. But the U.S. and Israel have not ruled out the option of striking Iran’s nuclear facilities if diplomatic efforts fails to settle the dispute.

“No options off the table means I’m considering all options,” President Obama said in December.

But earlier this week, Israeli Defense Minister Ehud Barak, in an apparent bid to calm speculation about military action, said an Israeli decision to strike Iranian nuclear facilities was “very far off.”

Many street vendors, meanwhile, fretted over bad business and an unpredictable future. Iran’s national currency, the rial, has plummeted against the U.S. dollar. The government recently banned black-market currency dealers from doing business.

“I’m increasingly losing my customers,” said a 55-year-old fruit and vegetable seller who gave his name as Akbar. “People are losing their purchasing power. Twenty years ago, after the eight-year-long war [with Iraq], there was a future, at least. We could predict and plan.”

“I am not worried about war, as there is no evident tendency to want to wage war among officials from both sides,” he said. “There is a lot of rhetoric, but it’s not serious.”