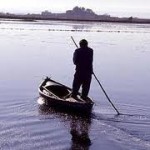 President Michel Suleiman condemned on Saturday the killing of a Lebanese Fisherman on the maritime border with Syria and called for “respecting Lebanon’s sovereignty.”

“Each state’s sovereignty needs to be respected,” Suleiman was quoted as saying by National News Agency (NNA) .

He called on relevant Lebanese-Syrian authorities to coordinate the issue “in order to prevent” the occurrence of similar incidents.

The president also called for “handing over” the fishermen who were said to be later taken into Syria along with their boat.

Syrian forces killed one Lebanese fisherman and wounded another when they seized their boat off the Lebanese-Syrian coast on Saturday, a relative said.

Similarly Prime Minister Najib Mikati condemned on Saturday the killing of a Lebanese boy after gunmen opened fire on a fishing boat on the maritime border with Syria.

According to the National News Agency, Mikati called on the Lebanese-Syrian Coordination Commission to resolve the issue and “take appropriate measures in order to prevent the occurrence of such incidents.”

The premier also called for releasing the other fishermen who were said to be later taken into Syria along with their boat.