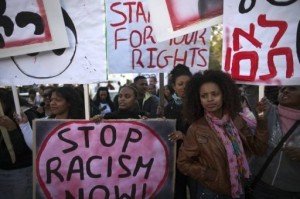 Rights groups and parliamentarians on Thursday criticised a court ruling upholding a law that prevents Palestinians married to Arab Israelis from obtaining Israeli citizenship or residency.

“It is a dark day for the protection of human rights and for the Israeli High Court,” attorneys Dan Yakir and Oded Feller from the Association for Civil Rights in Israel said in a statement.

ACRI was one of three rights groups that had appealed to the High Court over a law preventing the Palestinian spouses of Israeli citizens from obtaining either Israeli citizenship or residency.

At present, Palestinian men over 35 and women over 25 married to Israeli citizens can only obtain short-term permits to be in Israel that allow them limited permission to work, no social benefits and must be regularly renewed.

The petitioners said the law violated the right of Palestinians married to Arab-Israelis to a family life, but in a late-night ruling, the High Court said human rights could not override security concerns.

Six judges backed the controversial law, while five were opposed.

“Human rights are not a prescription for national suicide,” wrote Justice Asher Grunis, who is poised to become the next president of the court.

Yakir and Feller accused the court of stamping “its approval on a racist law, one that will harm the very texture of the lives of families whose only sin is the Palestinian blood that runs in their veins”.

In July 2003, parliament adopted a law limiting the right of non-nationals to residence in the Jewish state, blocking citizenship for Palestinians married to Arab Israelis.

Initially applicable for one year, the law was extended for security reasons but has been challenged by rights groups on more than one occasion.

‘Pouring oil on fires of racism’

Arab-Israeli MP Jamal Zahalka, of the Balad party, said the court “had failed the test of justice”.

“This decision will encourage the racist groups in the Knesset (parliament) to enact more anti-Arab, anti-democratic and anti-human rights laws,” he warned.

“The court’s ruling pours oil on the fire of racism burning in the Knesset and removes any fear that the High Court will repeal laws on grounds of unconstitutionality,” he added.

Mohammed Barakeh, another Arab-Israeli politician, from the Hadash party, said the ruling was proof of a “wave of racism” sweeping across Israeli institutions.

“This law, which differentiates between people in a repulsive, racist fashion, sets standards for an individual’s personal life and denies Arabs their right to choose their life partner,” he said.

Adalah, which works to protect Arab-Israeli rights and was part of the appeal to the High Court, also condemned the ruling.

“The court upheld a law that has no parallel in any democratic country in the world,” the group’s lawyers Hassan Jabareen and Sawsan Zaher said in a statement.

“The court has failed in its basic responsibility as a defender of the Palestinian national minority while the majority in the Knesset uses its power to affect the basic principles of democracy and particularly the rights of the Arab minority in Israel,” the lawyers added.

Israeli MP Zehava Galon, a member of the left-wing Meretz party who filed her own appeal to the High Court against the law, echoed Adalah’s criticism.

“The High Court has failed in its duty to defend the principle of equality of all citizens before the law and to fight against racism,” she told Israeli public radio.

“Israel defines itself as a Jewish and democratic state. For the first time, the High Court has privileged its Jewish character to the detriment of its democratic character,” he said.