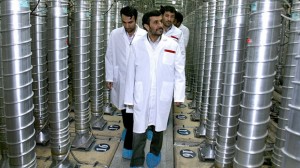 Iran has begun uranium enrichment at a new underground site well protected from possible airstrikes, a leading hardline newspaper reported Sunday in another show of defiance against Western pressure to rein in Tehran’s nuclear program.

Another newspaper quoted a senior commander of the powerful Revolutionary Guard force as saying Tehran’s leadership has decided to order the closure of the Strait of Hormuz, a strategic oil route, if the country’s petroleum exports are blocked. Revolutionary Guard ground forces also staged war games in eastern Iran in an apparent display of resolve against U.S. forces just over the border in Afghanistan.

“The supreme authorities … have insisted that if enemies block the export of our oil, we won’t allow a drop of oil to pass through the Strait of Hormuz. This is the strategy of the Islamic Republic in countering such threats,” Revolutionary Guard deputy commander Ali Ashraf Nouri was quoted as saying by the Khorasan daily.

Iranian politicians have issued similar threats in the past, but this is the strongest statement yet by a top commander in the security establishment.

The latest statements are certain to fuel tensions with the U.S. and its allies, which are trying to turn up pressure on Iran with new sanctions to punish it over its disputed nuclear program. The West suspects Iran is trying to make nuclear weapons, but Iran denies this.

The United Nations has already sanctioned Iran for refusing to stop uranium enrichment — which can produce both nuclear fuel and fissile warhead material. Tehran says its nuclear program is only for energy and medical research, and refuses to halt uranium enrichment.

Kayhan daily, which is close to Iran’s ruling clerics, said Tehran has begun injecting uranium gas into sophisticated centrifuges at the Fordo facility near the holy city of Qom.

“Kayhan received reports yesterday that show Iran has begun uranium enrichment at the Fordo facility amid heightened foreign enemy threats,” the paper said in a front-page report. Kayhan’s manager is a representative of Iran’s Supreme Leader Ayatollah Ali Khamenei, who has the final word on all important matters of state.

Iran’s nuclear chief, Fereidoun Abbasi, said late Saturday that his country will “soon” begin enrichment at Fordo. It was impossible to immediately reconcile the two reports.

Iran has a major uranium enrichment facility in Natanz in central Iran, where nearly 8,000 centrifuges are operating. Tehran began enrichment at Natanz in April 2006.

The Fordo centrifuges, however, are reportedly more efficient. And the site better shielded from aerial attack.

President Barack Obama approved new sanctions against Iran a week ago, targeting the central bank and its ability to sell petroleum abroad. The U.S. has delayed implementing the sanctions for at least six months, worried about sending the price of oil higher at a time when the global economy is already struggling. But the new sanctions nevertheless prompted a series of threats from Iranian officials about closing the Strait of Hormuz.

The newspaper paraphrased Nouri as saying that a 10-day naval war game which ended Tuesday was preparation for such a closure. The Guard, which is Iran’s most powerful military force and which has its own naval arm, has planned more sea maneuvers for February.

“The exalted leader (Khamenei) determined a new strategy for the armed forces, by which any threat from enemies will be responded to with threats,” Nouri said.

The U.S. and Israel have said that all options remain open, including military action, should Iran continue with its enrichment program.

Tehran says it needs the program to produce fuel for future nuclear reactors and medical radioisotopes needed for cancer patients.

The country has been enriching uranium to less than 5 percent for years, but it began to further enrich part of its uranium stockpile to nearly 20 percent as of February 2010, saying it needs the higher grade material to produce fuel for a Tehran reactor that makes medical radioisotopes needed for cancer patients. Weapons-grade uranium is usually about 90 percent enriched.

Iran says the higher enrichment activities — to nearly 20 percent — will be carried out at Fordo. These operations are of particular concern to the West because uranium at 20 percent enrichment can be converted into fissile material for a nuclear warhead much more quickly than that at 3.5 percent.

Built next to a military complex, Fordo was long kept secret and was only acknowledged by Iran after it was identified by Western intelligence agencies in September 2009.

Buried under 300 feet of rock, the facility is a hardened tunnel and is protected by air defense missile batteries and the Revolutionary Guard, Iran’s most powerful military force. The site is located about 20 miles north of Qom, the religious nerve center of Iran’s ruling system.

“The Fordo facility, like Natanz, has been designed and built underground. The enemy doesn’t have the ability to damage it,” the semiofficial Mehr news agency quoted nuclear chief Abbasi as saying Sunday.