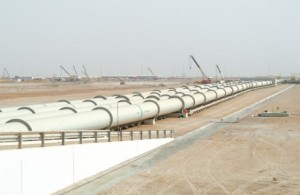 A pipeline that would allow oil from the United Arab Emirates to bypass the Strait of Hormuz separating it from Iran has been delayed because of construction difficulties, two people with knowledge of the matter said.

As many as 270 construction issues have pushed back the completion date, said the two people, declining to be identified because they’re not allowed to speak publicly on the matter. The $3.3 billion project won’t be ready until at least April, one of them said. Abu Dhabi, holder of most of the U.A.E.’s oil reserves, had planned to start exports in January 2011 through the pipeline to a port outside the strait, Dieter Blauberg, the project’s former director, said in May 2009.

The 1.5 million barrel-a-day link would ensure the U.A.E. can export crude without risking a blockade at Hormuz, where fully laden tankers exit the Persian Gulf with one-fifth of the world’s traded oil. The chance that Iran might try to close the waterway has intensified as Europe prepares to follow tougher U.S. sanctions on the country.

“That pipeline would carry pretty much all of Abu Dhabi’s oil,” Robin Mills, an analyst at Manaar Energy Consulting in Dubai, said Jan. 5. “It’s a critical bit of infrastructure, and it is remarkable it hasn’t been completed.”

An average of 14 crude tankers sail each day through the strait, which is 21 miles (34 kilometers) wide at its narrowest point, according to the U.S. Energy Information Administration.

Most of the oil exported by Saudi Arabia, OPEC’s biggest producer, as well as crude from Iraq, Kuwait, the U.A.E., Qatar and Iran itself must pass through the waterway, making Hormuz the world’s most important chokepoint, with a daily flow of 17 million barrels a day last year, according to EIA data.

An official at International Petroleum Investment Co., the pipeline’s owner, declined to say when the project would start when asked by Bloomberg on Jan. 3, and the company didn’t respond to an earlier e-mail seeking comment. China Petroleum Engineering & Construction Corp., the pipeline’s contractor, didn’t respond to a fax seeking comment on Dec. 15, and a spokesman for its parent China National Petroleum Corp. declined to comment when Bloomberg contacted him that day by telephone.

An official at Abu Dhabi Co. for Onshore Oil Operations, or ADCO, the state company assigned to operate the pipeline, referred all inquiries to IPIC, speaking by phone on Jan. 6. Abu Dhabi National Oil Co., or Adnoc, which owns 60 percent of ADCO, didn’t respond to questions e-mailed on Dec. 21, and public relations officials had no immediate response when contacted by phone that day and on Dec. 22 and Jan. 3.

Once ready, the pipeline will transport crude from Habshan, the collection point for Abu Dhabi’s onshore oil fields, over 230 miles (370 kilometers) of desert and razorback mountains to the port of Fujairah, on the U.A.E.’s eastern coast, facing the Gulf of Oman. The project’s declared aim is to “offset reliance” on Gulf terminals while reducing shipping congestion, according to IPIC, the Abu Dhabi government-run owner.

The line terminates at a kilometer-long (0.6 mile-long) site containing eight white storage tanks and pipes stacked four high over the length of a football field nestled at the foot of the Hajar Mountains.

Tankers will also save two days sailing time, worth about $38,000, by loading at Fujairah instead of Abu Dhabi, according to data provided by Clarkson Research Services Ltd.

IPIC initially planned to begin filling the pipeline in September 2010 then load cargoes the following January, Blauberg said in 2009. It later pushed back the start without explanation, saying in a bond prospectus on Oct. 19, 2011, that it expected to deliver first oil in “early 2012.”

The U.S. tightened economic sanctions against Iran over its nuclear program on Dec. 31, and the European Union is weighing a ban later this month on purchases of Iranian crude. Iran held 10 days of naval maneuvers east of Hormuz ending Jan. 3 and warned it would block the strait if prevented from selling its oil, according to Iranian state-run news agencies. The country plans even bigger military maneuvers in the area next month, the state-run Fars news agency reported on Jan. 5. Brent crude futures have risen 5 percent so far this month to $113 a barrel.

A potential Hormuz blockade “still remains the ultimate fear in the oil market,” Barclays Plc said in a Jan. 5 note.

Should Hormuz be closed to ships, the pipeline alone won’t prevent price rallies because most of the oil from the Gulf would still be stopped, Kamel al-Harami, an independent oil analyst said by phone from London on Jan. 6.

Weeks of Iran tension has added about $10 a barrel to Brent crude prices, said al-Harami, who was head of crude and products marketing at state-run Kuwait Petroleum Corp. during the 1980s “Tanker War,” when Iran and Iraq attacked each other’s ships.

Still, a closure of the strait by Iran, in response to opposition to the nation’s nuclear program, is not a “high- likelihood event,” David Fyfe, head of the International Energy Agency’s oil market and industry division, said in a Jan. 4 phone interview from Paris.

A Jan. 5 visit to the Fujairah site identified by a black- and-white sign saying “Abu Dhabi Pipeline Co. Oil Terminal” showed construction workers in blue overalls and hardhats shuttling by bus into and out of the oil storage facility.

Khaled al-Raeesi, a public relations and securities officer for China Petroleum Engineering & Construction, declined to comment on the pipeline’s status when questioned at the site that day, deferring all questions to IPIC.

Of the 270 construction issues detected during an inspection of the project last year, more than 50 were deemed critical, according to one of the people with knowledge of them.