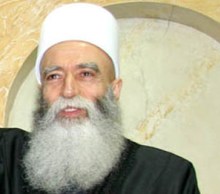 Druze spiritual leader Sheikh Al Akl Naim Hassan denounced the bombing that rocked Damascus on Friday. In a statement issued on Sunday he warned against “sowing chaos, destruction, tension and strife” in Syria.

Hassan also called on “all concerned in the Arab world, particularly in Syria, to reinforce national and Islamic unity, reject radicalism and fighting, embrace reform and democracy , and resolve the current Syrian crisis.”

He also renounced the “waves of terrorist bombings striking Iraq,” according to the statement.

The United Nations estimates more than 5,000 people in Syria have been killed in the crackdown since March.