At least 27 killed in Syria’s protests 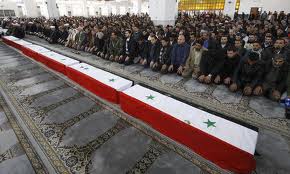 At least 27 people have been killed in clashes throughout Syria, an opposition group has said.

Eight died in the city of Homs and 13 in Idlib, the Local Co-ordination Committees said.

Scores of people have died in ongoing violence since Arab League monitors came to assess a regional peace plan.

The clashes came as thousands joined a massive government-organised funeral ceremony for victims of Friday’s bomb attack in the capital Damascus.

At least 26 people died in that attack, some of them members of the security forces.

The government has vowed to “strike back with an iron fist” against the perpetrators, but opponents accuse the authorities of staging the attack.

Opposition activists have urged Syrians to take to the streets in mass protests ahead of an Arab League meeting in Cairo on Sunday which will debate the initial findings of the observer mission.

The UN says more than 5,000 civilians have been killed since protests against President Bashar al-Assad began 10 months ago.

According to the Syrian opposition Local Co-ordination Committees 27 people died around the country on Saturday – eight in Homs, 13 in Idlib, five in the suburbs of Damascus and one in Hama.

Local opposition groups said 35 had been killed on Friday, in the anti-government protests which have routinely followed Friday prayers. None of these numbers can be verified.

The Arab League observers have been in Syria since late December to monitor compliance with a peace plan under which the government promised to withdraw the military from the streets and cease its use of force against civilians.

But critics say Mr Assad is using their presence as a political cover and that attacks continue.

Saturday’s funerals were held at a mosque in the district of Midan, where Friday’s bomb attack took place. It is usually a hotbed of protests against the government.

The coffins were brought in ambulances through streets lined with mourners.

But the ceremony and procession were clearly organised by the authorities, with many participants carrying pictures of Mr Assad or national flags, which were also used to cover the coffins.

Some of those taking part were also heard chanting pro-government slogans, like “The people want Bashar al-Assad!” and “One, one, one, the Syrian people are one!”.

The Damascus blast happened at a busy junction in the Midan district of Damascus.

Interior Minister Ibrahim al-Shaar blamed the attack on a suicide bomber, who he said had “detonated himself with the aim of killing the largest number of people”.

“We will strike back with an iron fist at anyone tempted to tamper with the security of the country or its citizens,” he said.

But the country’s main opposition coalition, the Syrian National Council (SNC) said the attacks had been carried out by Mr Assad’s government to discredit its critics.

“It is a continuation of the regime’s dirty game as it tries to divert attention from massive protests,” said spokesman Omar Idlibi.

The US condemned the attack, saying violence was not “the right answer to the problems in Syria”.

Two weeks ago 44 people died in similar blasts also blamed on terrorists but which opposition groups accused the government of staging.