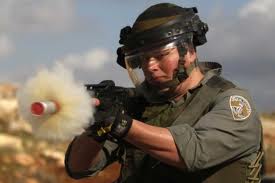 A Palestinian protester who was struck in the face by a tear gas canister fired by an Israeli soldier at close range died of his wounds Saturday, activists said, accusing the army of using disproportionate force.

The 28-year-old, Mustafa Tamimi, was hurling rocks at the military vehicle on Friday in the West Bank village of Nabi Saleh when a soldier inside opened the rear door and fired at him from just a few yards away, witnesses said. He was taken to an Israeli hospital, where he died of his injuries on Saturday.

The army’s use of the gas canisters has come under sharp criticism in the past few years. Military officials say they are using the gas to quell violent demonstrations. The canisters, which emit choking, acrid smoke, are meant to push back crowds. But some Israeli troops have fired them directly at demonstrators, causing severe injuries and death.

Tensions also simmered along Israel’s border with the Gaza Strip, where mourners buried a 12-year-old Palestinian killed in an Israeli airstrike on Friday. Militants there fired two rockets at Israel.

Tamimi is the 20th person to be killed over the past eight years at similar demonstrations in rural villages throughout the West Bank, said Sarit Michaeli of the Israeli rights group B’Tselem. The weekly demonstrations are in protest of construction of Jewish settlements and a separation barrier that eats up Palestinian farm land along parts of its route.

Photographs taken by a pro-Palestinian activist from Israel, Haim Schwarczenberg, show Tamimi rushing after an armored military vehicle. The photographer says he was throwing rocks. He then crumples to the ground a few steps from the vehicle. His friends rush to help, covering his bloodied face with a black-and-white Palestinian checkered scarf.

“As he was throwing stones, a soldier opened the door of the back of the jeep. A soldier took his gun out and shot him directly,” Schwarczenberg said.

Tamimi succumbed to his wounds at Beilinson Hospital in central Israel, said another pro-Palestinian activist from Israel, Jonathan Pollak.

B’Tselem spokeswoman Michaeli said she had personally filmed at least a dozen cases over the years of soldiers directly firing the projectiles at demonstrators, sometimes causing terrible injuries. She said the difference in this case was the very close range between the demonstrator and the soldier, who hit Tamimi in the face.

A military spokeswoman said forces generally used canisters “to contain the violent and illegal riots that take place in Judea and Samaria,” the Biblical names for the West Bank. “Such means were used during the course of yesterday’s riot in Nabi Saleh.”

Others who have been struck by tear gas canisters include Palestinian Bassem Abu Rahmeh, who was killed in 2009 when one hit his chest.

They also include Tristan Anderson of Oakland, Calif., who is suffering from brain damage, paralysis and seizures after he was hit in the head by a canister at a 2009 demonstration.

In the Gaza Strip on Saturday, hundreds of angry mourners marched in a funeral procession for a 12-year-old boy who was killed Friday along with his father in an Israeli strike.