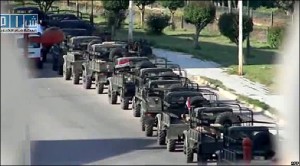 France called on world powers to “save the Syrian people” on Saturday as it joined the United States and Britain in raising an alarm that President Bashar al-Assad’s forces may be about to storm the rebel stronghold of Homs.

In Damascus, the government denied any crackdown, while accusing its opponents of taking up arms and warning the rebels’ supporters in the West that Syria could count on Russia, China and others to oppose any foreign intervention in its affairs.

In Homs, a pro-democracy activist said there was no clear sign of a troop build-up other campaigners had reported around the city on Friday. Opposition groups have called for businesses and labor not to work on Sunday, the first day of the working week in Syria, in what they have called a “Strike for Dignity.”

The Syrian Observatory for Human Rights, an opposition website, said 12 people were killed across the country on Saturday plus a man who died of his wounds and three bodies returned to families whom it said had died of torture.

“France warns the Syrian government and will hold the Syrian authorities responsible for any action against the population.

“The entire international community must mobilize itself to save the Syrian people,” Valero added in a statement.

On Friday, a U.S. State Department spokeswoman said: “It is extremely concerning that in places like Homs we have huge number of reports that they are preparing something large-scale.

“They are not going to be able to hide who’s responsible if there is a major assault on the weekend.”

Syria rejected that characterization of events: “There is no policy of crackdown,” Foreign Ministry spokesman Jihad Makdesi told Reuters in an e-mail. “The Syrian forces are there to protect civilians and maintain law and order that is breached by those who are carrying arms against the State.

“The story of peacefulness of the protest is no longer a valid story in some places,” he said. “Syria needs evolution and not armed confrontation.”

It cited a message from Russia’s U.N. ambassador Vitaly Churkin to the United Nations Security Council, which has been the forum for sharp divisions over Syria between the Western powers on the one hand and Russia and China on the other.

Such differences, and Syria’s pivotal position at the heart of a web of regional conflicts, mean few see much possibility for the kind of Western military action seen this year in Libya.

The Arab League has been pressing Syria, under threat of sanctions, to remove troops from its towns and let in observers. Egypt’s MENA news agency said on Saturday Arab foreign ministers will meet in Cairo at the end of the week to discuss a response to what it called a conditional Syrian acceptance of monitors.

Turkey warned Syria on Friday it would act to protect itself if the crushing of protest threatened regional security and unleashed a tide of refugees on its borders.

The opposition Syrian National Council said in a statement about Homs on Friday: “News reports, videos and information from activists indicate that the regime is preparing to commit a massacre in the city to extinguish the flame of the revolution and ‘discipline’ the rest of Syria’s cities.”

However, some activists questioned whether the SNC statement was intended principally to galvanize international action.

One campaigner in Homs, a city of 1.5 million, saw little sign of an imminent offensive on Saturday: “I have been hearing this since yesterday. I did a tour around the city and I did not see anything unusual.

“It’s the same checkpoints and the same number of soldiers.”

Peaceful demonstrations calling for reform began in Syria in March, inspired by the Arab Spring, but were met almost from the outset by lethal force. Activists say about 4,600 Syrians have been killed, about a quarter of them from security forces.

President Assad says some “mistakes” may have occurred but denies giving any shoot-to-kill order over the past nine months of violent repression, which has prompted defections from the military and led to the creation of a rebel Free Syrian Army.

The Syrian National Council and the Free Syrian Army are separate organizations. The Council has urged the rebel army to stop attacking the army and limit itself to purely “defensive” actions, in order to avoid starting an all-out civil war.

U.N. rights chief Navi Pillay repeated her call for investigators to be allowed into Syria. She is due to brief the Security Council on Monday at the request of France.

In Oslo, where this year’s Nobel Peace Prize was presented on Saturday to, among others, a Yemeni campaigner whose part in the Arab spring helped push that country’s veteran autocrat to the exit, the head of the prize selection panel said Assad would inevitably have to yield before the “wind of history.”