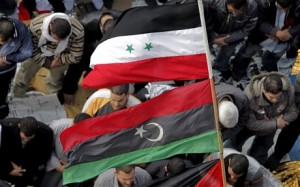 Syrian rebels held secret talks with Libya’s new authorities on Friday, aiming to secure weapons and money for their insurgency against President Bashar al-Assad’s regime, The Daily Telegraph has learned.

At the meeting, which was held in Istanbul and included Turkish officials, the Syrians requested “assistance” from the Libyan representatives and were offered arms, and potentially volunteers.

“There is something being planned to send weapons and even Libyan fighters to Syria,” said a Libyan source, speaking on condition of anonymity. “There is a military intervention on the way. Within a few weeks you will see.”

“The Libyans are offering money, training and weapons to the Syrian National Council,” added Wisam Taris, a human rights campaigner with links to the SNC.

The disclosure came as rebels raided an air force base outside the city of Homs and killed six pilots, according to a statement by the country’s military.

Rebel attacks have become daily occurrences since the onset of the insurrection. The conflict has claimed at least 3,500 lives, mainly as part of a crackdown by the government.

Syria’s regime has continued to defy pressure from the Arab League, ignoring yesterday’s deadline to accept the deployment of 500 human rights observers, raising the possibility that economic sanctions may be agreed this weekend.

Large shipments of weapons have not yet been sent, said activists, mainly because of logistical difficulties. But proposals for a “buffer zone” inside Syria, monitored by the Arab League, or the likely emergence of an area inside the country controlled entirely by rebels could solve this problem.

“The [Libyan] council’s offer is serious,” said Mr Taris. Turkey, which has denounced President Assad’s regime, is already sheltering about 7,000 Syrian opposition activists, including the leader of the Free Syrian Army, the nascent rebel movement, in a “safe zone” along Turkey’s border with Syria.

Sources in the Libyan town of Misurata suggested that some weapons may already have been sent. Some smugglers were caught selling small arms to Syrian buyers in Misurata, said a man who trafficked guns to Libya’s rebels during the country’s civil war.

Post-conflict Libya is awash with arms, many of them taken from the vast military stores maintained by Col Mummar Gaddafi’s regime. Kalashnikov assault rifles, modern missiles and even tanks found their way into Libya.

Libyans feel closely aligned to the Syrian cause, said Hameda al-Mageri, from the Tripoli Military Council. “Bashar sent Gaddafi weapons when he was fighting us. There are hundreds of people who want to go to fight in Syria, or help in other ways if they can.”

But Libyan officials deny the claims. “This is what you hear in the street,” said Ramadan Zarmoh, the leader of the Misurata military council. “Officially there is none of this. I would never send any fighters to fight outside the country.”

Ministers from the Arab League are expected to meet in Cairo over the weekend to consider sanctions on Syria.

David Cameron, the Prime Minister, and his Qatari counterpart, Sheikh Hamad bin Jassem al-Thani, on Friday pledged to keep up talks with Syrian opposition groups in an attempt to support a transition to a stable democracy.

“They were clear on the importance of the Syrian regime accepting the Arab League’s initiative to end the violence and they agreed on the need to continue talking to the Syrian opposition movements to support the transition to an inclusive and stable democracy,” a Downing Street spokesman said.

Measures under consideration are believed to include suspending all flights to Syrian airports, halting any transactions with the country’s central bank and freezing any Syrian government bank accounts. However, it remains unclear whether there is sufficient support to introduce them. Lebanon has publicly opposed sanctions.