by yalibnan
2560
The chilling spectacle of Muammar Gaddafi's brutal end last month and the capture of his son Saif al-Islam this week, far from deterring Bashar al-Assad
Share: 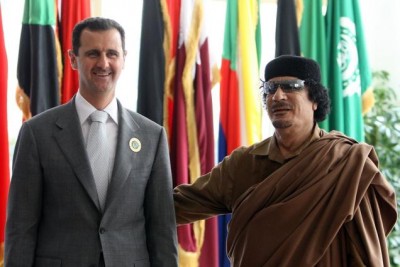 The chilling spectacle of Muammar Gaddafi’s brutal end last month and the capture of his son Saif al-Islam this week, far from deterring Bashar al-Assad, seem to have energized him into redoubling his efforts to crush Syria’s eight-month rebellion.

As the Arab League intensified Assad’s isolation by suspending Syria’s membership, defecting soldiers in the Free Syrian Army carried out their boldest attacks so far at Deraa in the south and on an Air Force intelligence base near Damascus.

Unconfirmed reports said the rebels also fired rockets at a headquarters of the ruling Ba’ath party in Damascus, until now firmly locked down by the regime’s security apparatus.

The country of 22 million, convulsed this year by a civil uprising like those that brought down dictators in Tunisia and Egypt, now appears to be on the brink of a Libya-style armed insurgency, with arms flowing in from Lebanon, Jordan and from soldiers who have deserted with their weapons.

Most observers believe Assad will fight it out, playing on fears of a sectarian war between minorities and the Sunni majority if the country’s complex ethno-sectarian mosaic unravels, and that neither western powers nor Arab neighbors would risk military intervention to prevent it.

Arab leaders and Syrian opposition figures, with growing support from the Arab League, are now lobbying for a “Contact Group” for Syria, led by Britain and France, to help prepare for a transition in the belief that Assad’s days are numbered and preparations to deal with the fall-out are now essential.

“I think we’ve entered into a new phase. I don’t know if it’s the final phase but it is significant because of two things: on the ground there is a more militarized environment, and in the diplomatic sphere, a more determined effort which includes Arab cover,” Salman Shaikh, Director of the Brookings Doha Center, told Reuters.

As Assad expands his military onslaught, which might soon include the use of air power, Arab leaders want the group to consider contingency plans for no fly zones and safe havens near the Turkish and Jordanian borders to protect civilians.

“The Assads are finished and the dam could burst as soon as next year,” one senior Arab diplomat said. “The Arabs have acted because they know he cannot survive.”

There is now, moreover, an Arab, international and Turkish coalition that has proven to be effective in Libya and will be effective with Syria, according to Salman Shaikh.

“If you look at the core countries that are driving this: France, Turkey, Qatar and the U.S. This disengagement and attempt at isolating Syria, particularly by these countries, is very significant and I think will have, in the longer run (and it is a long run game) a debilitating effect on the regime,” Shaikh said.

The Arab League said it would follow through with its decision to suspend Syria, establish contacts with the opposition and examine how the Arab bloc and the United Nations can protect civilians from military attack.

“An international consensus is emerging with the exception of Russia that Syria is to blame for the violence,” said Fawaz Gerges, Professor of Middle Eastern Politics at the London School of Economics.

But the 46-year-old Assad looks set to tough it out. “The conflict will continue and the pressure to subjugate Syria will continue. Syria will not bow down,” Assad told the Sunday Times.

Most analysts said Assad, who can depend on the loyalty only of two elite Alawaite units – the Fourth Armoured Division and the Republican Guard – cannot maintain current military operations without cracks emerging in the armed forces.

They say Assad is taking a gamble because of his growing deployment of regular units whose rank and file are Sunnis.

Assad, who inherited power from his father Hafez al-Assad 2000, is a member of the minority Alawite community, an offshoot of Shi’ite Islam that amounts to about 12 percent of the population and dominates the state, the army and the security services in the majority Sunni Muslim country.

The 260-member Syrian National Council, which is leading the opposition against the Assads’ 41-year rule, said a conference will take place in Egypt under the auspices of the Arab League, to bring together political factions and independent figures to plan the transition and set rules for a democratic system.

“The opposition is more mature now. It is ready to agree on a common vision,” said SNC spokeswoman Bassma Kodmani.

There are many scenarios that could see Assad brought down; none of them neat and orderly.

Some see an Alawite who is part of the community’s hierarchy – but not the regime’s inner circle – moving to oust Assad and his family and, in the interest of the Alawites and other minorities such as the Christians and Druze, to embark on an orderly transition toward a new democratic Syria.

“I think efforts to try and pressure the Alawite security core by slapping sanctions, asset freezes and travel bans with the promise of putting them on a list for the International Criminal Court in the future is a good thing, that should concentrate their minds,” Shaikh added.

Observers say there are some prominent Alawite figures who could play a role in a post-Assad Syria while defecting military officers could also be at the forefront.

Related to that, there are groups within the opposition working on a strategic 10-year transition plan.

It involves some sort of a national unity government, which comprises major blocs and is as inclusive as possible and could last for a couple of years. This would set the stage for parliamentary elections and a new constitution.

As opposition plans start to crystallize with increased external support, Assad is trying to present himself as the only shield against a slide into chaos, Iraq-style sectarian carnage, and the triumph of hardline Islamists from the Sunni majority.

While the struggle still looks unequal, Assad has already lost the political battle in cities such as Homs, Hama or in the Idlib and Deraa areas, where he has only been able to maintain control through overstretched military units.

Many Syrians have defied the military crackdown to keep up demands for change, despite bloodshed which the United Nations says has cost 3,500 lives — as well as those of 1,100 soldiers and police, according to the government.

Aside from the human, military and political cost, Assad faces U.S. and European sanctions against Syria’s oil exports and an economic collapse that is crippling his government.

But nobody believes sanctions alone can bring down Assad.

“I am not suggesting that there’s going to be some orderly disintegration of the regime. It is likely that there will be a continued militarization and the regime will be ousted through military means, with the assistance perhaps of Turkey and other Arab states – perhaps with buffer zones in both Jordan and Turkey which would be focused on protecting civilians and offering a safe haven for those launching attacks,” Shaikh said.

The big powers are more united in their campaign to subdue Assad, while ruling out military intervention.

“A military intervention is not likely and the NATO example of Libya is not applicable to Syria. Where would they hit? Gaddafi had military bases entrenched across the country. Any attack on Syria would have reverberations and reactions in neighboring countries,” said Middle East expert Jamil Mroue.

Armed with a U.N. Security Council mandate to protect civilians, Western powers provided air support to Libyan rebels who toppled Gaddafi, but are not inclined to repeat the feat in Syria, in a far trickier arena of the Middle East.

Russia, which believes NATO stretched the U.N. mandate on Libya to embrace regime-change, firmly opposes any resolution against Syria, where it has its only permanent Mediterranean port facilities at Tartous.

Assad’s own specter-waving has reinforced the fears of Syria’s neighbors – Israel, Lebanon, Iraq, Jordan and Turkey – about the possibly seismic consequences of a power shift in a nation on the faultlines of several Middle Eastern conflicts.

Instability in Syria, an ally of Shi’ite Iran and Hezbollah, could spread to volatile Lebanon or Iraq.

Israel relies on Assad to stabilize their common border, and fears his fall could herald less predictable rulers.

Undeniably, too, Assad still retains substantial support within his own Alawite minority, parts of the business elite, Christians and others who fear that Islamist radicals might come to the fore, and, crucially, army and security force commanders.

“The Syrian regime is not isolated internally as many would like to believe. It retains a strong social base of support in major centers like Damascus, Aleppo and Latakia where 60 percent of the population live,” Gerges said.

“There is a real danger that Syria has already descended into a prolonged conflict no one knows its outcome internally and regionally. I don’t see a way out for the Assad regime. Assad has no exit strategy. This is a fight to the bitter end for the family, the clan, with the mentality: either I am going to be killed or I kill my enemy,” Gerges said.

There are those who believe that Assad’s last real ally, Iran, will help him financially.

“Iran will not give up on Bashar. It is a matter of survival for them too,” said Mroue. “Iran believes that targeting Syria is a first step in clipping the wings of the Islamic Republic. The same goes for Hezbollah.”

Yet some observers note that the Iranians, struggling with U.N. sanctions and economic problems of their own, are already making tentative contact with the Syrian opposition.