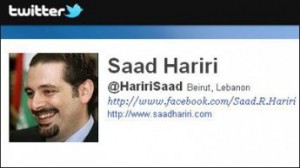 After months out of the political arena, former Lebanese Prime Minister Saad Hariri has staged a candid comeback on Twitter. But can Hariri transform his cyber success into concrete political gains?

For more than a week now, Hariri’s personal account, @haririsaad, has been creating a buzz, with the former Lebanese leader conducting an almost daily dialogue with his “followers”. At last count, he had more than 24,000 of them.

The 41-year-old Hariri has had a Twitter account for more than a year, but his tweets had mostly been impersonal and institutional. That all changed on November 3 when he announced, “Well it’s about time to make this more up close and personal, you [sic] be hearing from me more often and i’ll be around as much as i can.”

He has since stuck to his word, offering his followers up to 140-character messages ranging from the profound to the prosaic, on topics ranging from scuba diving to foreign relations, and mostly in English, in a tone that’s perceptibly honest and often funny.

That in itself is a break from the sort of discourse most Arabs have come to expect from their leaders.

“Guys check @HaririSaad favourite tweet, he has a good sense of humour ;),” tweeted @MohanadHageAli on November 9.

Hariri’s Twitter account has generated much discussion in the Lebanese media, with his press office having to confirm the authenticity of his account in order to convince skeptics.

Hariri has been living between the Saudi capital of Riyadh and Paris, where his family owns several properties. His departure from Lebanon followed a spate of reports in the French and Lebanese media of assassination plots against him. His father, former Lebanese prime minister Rafiq Hariri, was assassinated in a 2005 bomb attack.

After the January 2011 fall of his government, Hariri largely disappeared from the Lebanese political scene, an absence that has earned him ridicule from his political opponents.

Ahead of the 2013 parliamentary elections, Hariri’s likely return is a topic of much discussion on his Twitter page.

Responding to a follower’s question expressing skepticism over the authenticity of the Twitter account and inquiring about his return to Lebanon, Hariri tweeted on November 4: “yes it is the real saad and i will go back to lebanon when the timing is good, and believe me i want to go back more then you think”.

Hariri’s tweets are timely, topical and concise – necessarily so, given Twitter’s 140-character limit.

Shortly after the Arab League voted to suspend Syria from its meetings on Saturday, Hariri tweeted: “It was a great being with u all on this historic day for all Arabs& particularly Syrians struggling for freedom democracy&true Arab identity”.

During a live Q&A session on the microblogging site, Hariri criticised the Lebanese government’s vote against the decision. “It is shameful and I hope the Syrian people know that this government doesn’t represent the Lebanese will,” he said.

His family has accused the Syrian regime of masterminding the assassination of his father. When the younger Hariri became prime minister in 2009, he had to visit the Syrian capital, where he publicly shook hands with Assad. Out of office, Hariri can be candid about his tenure: “You think I was happy to go to Syria?” he tweeted November 8.

The highly political nature of tweets on Lebanon and Syria is not lost on observers. According to Imad Bazzi, a Lebanese journalist and an influential blogger, Hariri and current Lebanese Prime Minister Nagib Mikati have invested time and energy in social networking after witnessing the enormous impact Twitter and other sites were able to make during the Arab Spring.

Bazzi told Lebanese English-language newspaper the Daily Star: “They finally understood what this medium can bring in terms of exposure.”Scepticism is just a tweet away.”

The new brand of digital diplomacy – or lack thereof – in the Lebanese political sphere has been revelatory.

In a tweet about politician Nabih Berri’s re-election as speaker of the house – which was supported by Hariri’s political bloc – Hariri said, “No voting for berri anymore if we win the election that is a promise”.

But in the microblogging world, scepticism does indeed appear to be just one tweet away. In response to Hariri’s tweet, a follower promptly shot back: “With all my respect, plz dont make promises u cant keep”. To which Hariri replied: “i will keep it believe me and i promise.”

The spat escalated when Berri issued a statement declaring, “Hariri has revealed in his electronic messages a number of his personal hobbies these days, one of which is diving. The Lebanese have also discovered a new hobby of the ‘sheik’, and that is of politics. Better he dive into the former than the latter.”

Hariri made no response for a day – which can be a long time in the microblogging world. But when a follower asked what Hariri would choose to teach, if he could teach anything, Hariri tweeted: “scuba diving, in spite of Mr Berri”.

As the Arab Spring gives way to winter of discontent, sceptics have questioned whether the revolution can be tweeted. It remains to be seen how far Hariri can push his virtual political agenda in the real world. But at the very least, it promises to be entertaining.