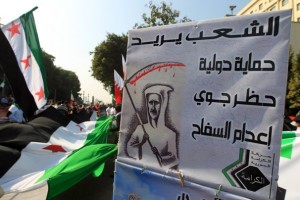 The Syrian government Sunday appealed for an emergency summit of the Arab League to avert “preparations for a war on Syria,” amid signs that the regime led by President Bashar al-Assad has been seriously shaken by the regional body’s decision to suspend its membership.

The call for an urgent session of the Arab League came as tens of thousands of pro-government demonstrators thronged central squares in the cities of Damascus and Aleppo to denounce the Arab League’s move Saturday, which opens the door to an escalation of international pressure on the regime to halt its violent crackdown against an eight-month old uprising.

Syrian state television broadcast hours of live coverage of the demonstrations, in which government supporters waved Syrian flags and portraits of Assad, and chanted slogans supporting the president.

Overnight, hordes of Assad supporters attacked the Saudi Arabian and Turkish embassies to vent their anger. The Saudi News Agency said the assailants stormed the embassy, attacked a guard and broke windows.

A crowd of 1,000 people tried to force their way into the Turkish embassy in Damascus, and there were also attacks against the Turkish consulates in Aleppo and Lattakia, according to Turkey’s state-run Anatolian news agency.

CNN Turk and Turkey’s NTV news channel reported that Turkey was preparing to evacuate the families of its diplomatic staff in Syria after the attacks.

Though Turkey is not in the Arab League, it has harshly condemned Assad’s behavior, and given sanctuary to opposition leaders and defected Syrian army soldiers. The move by the Arab League to isolate Assad is expected to increase pressure on Turkey to also take firmer action against Syria, including economic sanctions.

The appeal for an emergency summit was reported by official state television news, which also said the government had invited Arab observers and monitors to visit Syria, a concession to one of the terms of an Arab League peace plan that Syria has so far failed to heed.

“The Arab League decisions are the beginnings of the internationalization of the crisis and of preparations for a war on Syria,” the TV announcer said, citing an “official source.”

On Saturday, the 22-member Arab League voted for a package of measures aimed at pressuring Syria, including the suspension of its membership and the imposition of sanctions. The Arab League also summoned members of the opposition to discuss “the transitional period”, an indication that Arab leaders are looking ahead to a post-Assad future.

The official SANA news agency said Syria wants to hold the emergency summit before the suspension goes into effect Wednesday.