by yalibnan
2184
In Damascus, the regime presents a picture of vast rallies of support. But as tensions rise on the nation's borders, cracks are showing. In Beirut, Robert Fisk peers behind the propaganda
Share: 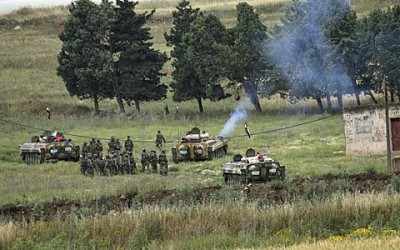 Cross-border tank incursions; four Syrian opponents of the Damascus regime kidnapped in Lebanon, supposedly in a vehicle belonging to the Syrian embassy in Beirut; a truckload of ammunition and rocket-propelled grenades destined for President Bashar al-Assad’s opponents on the other side of the Lebanese frontier seized by the Lebanese army – not to mention the mass rally in favour of Bashar in Damascus last week, which Syrians arriving in Lebanon say really – really – did count a million people on the streets. Every tragedy has its mystery, I suppose, but this one is taking on Gone With The Wind proportions.

Above that huge mass of Bashar supporters flew Syrian military helicopters carrying massive national flags of Russia and China – Syria’s two friends in the Security Council, who vetoed UN sanctions against the Damascus government last week. It was the perfect antidote to all those YouTube pictures of dead protesters and dying children, not to mention the infamous photograph of a girl allegedly beheaded by the Syrian secret police who turned out – deus ex machinus on Syrian television – to be very much alive and obviously well and even wearing a modest veil. Confusing? At least we now know, from the very lips of Assad’s opposition, that the “armed gangs” that the regime says it is fighting really do exist, albeit that they wear uniforms.

But first, the incursions. After enjoying the benefits of Syria’s 29-year military presence in Lebanon – the army left in 2005 – the Lebanese are a bit sensitive when Bashar’s lads appear near their border, apparently looking for gun-runners of the kind who were driving the truck near Halba last week. And when a Syrian drives a few metres across the frontier and fires a shell into an abandoned battery factory, it all becomes a little more serious. There have been at least three recorded Syrian incursions into Lebanon – a further eight are suspected – and during one of them, near the village of Ensal, a man was killed. He turned out to be a local Syrian resident. The border, needless to say, is notoriously difficult to locate. One R. Fisk even crossed it by accident years ago, but opponents of Lebanon’s Hizballah-inclusive (and thus pro-Syrian) government raged against this supposedly massive incursion upon Lebanese sovereignty.

They cared a lot less about the lorry-load of weapons on its way to the unofficial border crossing at Wadi Khalek where the “armed gangs” were presumably waiting for it, a bit of an incursion into Syria’s sovereignty although opposition newspapers in Beirut – largely representing the Sunnis and part of the Christian community – sarcastically asked why Lebanese security services were so good at finding smugglers but so slow in driving Syrian armour back over the frontier.

On now to the case of 86-year-old Chibli al-Aysoouni, a founder of the original Baath party who left Syria in 1966, before the Assad family even came to power. Against the regime but inactive since 1992 – he had also exiled himself in Egypt, Iraq and the US – he disappeared from his home in the Lebanese mountain town of Aley on 24 May and was never seen again. Then three Syrian brothers from the Jassem family were grabbed by “unknown men” outside a police station in east Beirut when they came to collect their brother, Jasem Merii Jasem, who had been seen handing out flyers calling for “democratic change” in Syria.

At the time, no one paid much attention to these disappearances, although EU ambassadors had already complained to the Beirut government when the Lebanese army sent back to Damascus three Syrian military deserters. Fearing that the latter were not greeted by their officers with tea and cakes by the fire, the ambassadors warned that this could amount to a crime against humanity. But then last week came a political explosion.

Lebanese MPs revealed that at a closed parliamentary committee meeting, General Ashraf Rifi, the friendly, beatle-eyed head of Lebanon’s paramilitary Internal Security Force, claimed that Syrian embassy vehicles in Beirut were used in the abductions and that documents and security cameras in the embassy parking lot in west Beirut – along with “security agents” – had all confirmed this. Indeed, it appears that some of Rifi’s own ISF were driving the cars. The plot thickened – in fact, it virtually turned to glue – when it transpired that the Syrian embassy guard unit is run by Lebanese First Lieutenant Salah Hajj, the son of Major General Ali Hajj, one of four Lebanese officers imprisoned for four years by the UN on suspicion of involvement in the 2005 assassination of former Lebanese Prime Minister Rafiq Hariri – until the UN decided that it had been conned by false evidence and freed the four men.

Explosions of fury could then be heard from the office of Syria’s intelligent ambassador to Lebanon, Ali Abdel Karim Ali – he has just finished reading a book about Lebanon by the author of this article – who transmitted to Lebanese Foreign Minister Adnan Mansour his anger that these extraordinary allegations had been made against him. He denied them all, and demanded proof from General Rifi, an undeniably pro-opposition top cop who has since remained silent. Syria and Lebanon, Mr Ali announced, were the victims of “an American-Zionist plot”. Syria would come stronger out of these troubles than it had been before.

And yet there was the UN this weekend, warning of a “full-blown civil war” in Syria – a distant cousin, I guess, of ordinary civil war of the Libyan variety – as the death toll in seven months of anti-Assad protests rose, again according to the UN, to 3,000, 187 of them children. On Saturday, the Lebanese press published photographs of a 14-year-old Syrian boy, Ibrahim al-Chaybane, whom it said had died in a Syrian hospital after being shot in the chest by Syrian security forces. Again, the picture was on YouTube. A unit of Syrian army deserters, claiming they were several thousand strong – a statistic which probably belongs in the ho-hum department – has now emerged on the internet, along with pictures of some of the uniformed men; an audacious act which also proves that the opponents of Assad, while they may not be “gangs”, are very definitely armed.