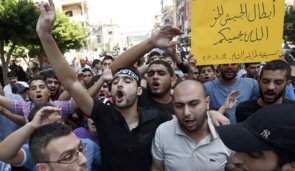 The army seized the truck Friday on the Halba-Khraibeh road in the Akkar region, 140 kilometers north of Beirut.

Lebanese news agency reported the weapons were to be smuggled into Syrian-Lebanese border towns.

The van was thought to be owned by a Lebanese man from the area of Wadi Khaled, where at least 5,000 Syrians have sought refuge since the uprising against the regime of President Bashar Assad erupted in Syria in mid-March.

Syrian and Lebanese authorities have worked in concert to thwart smugglers transporting weapons from Lebanon into Syria.

Syrian troops this week were deployed along the northern border with Lebanon to stop Syrian refugees and army deserters from fleeing into Lebanon, and to keep an eye out for weapons smugglers.

In Syria, activists told DPA that 21 people were killed in protests and violence that gripped the country on Friday.

The state-run news agency SANA said Saturday an armed group attacked a bus heading from Damascus to the northern city of Aleppo, injuring the driver and several passengers.

That same bus was later attacked a second time by gunfire after crossing the Talbiseh bridge, reports said.

SANA said on Friday that grenade throwers attacked an army checkpoint in Daraa, killing one soldier.

Syrian authorities blame “gangs of armed terrorists” for the unrest that is gripping the country. A recent UN report says Syria’s government has killed more than 3,000 pro-democracy protesters since the unrest began.