US ready to help the Lebanese army, report 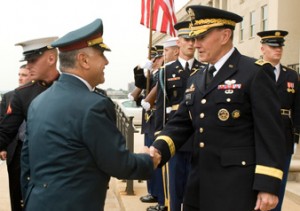 Following his meeting with Lebanese army commander General Jean Kahwaji , Chairman of the US Joint Chiefs of Staff General Martin Dempsey said on Thursday that the US “is ready to improve the skills of the Lebanese army in the fields of training, arming and logistics,” according to National News Agency.

Dempsey and Kahwaji discussed bilateral relations and ways to develop the American aid program which has been planned for the Lebanese Army.

Met with the commander of the Armed Forces, in the framework of his visit to the United States of America, chairman of the Joint Chiefs of Staff U.S. Army Gen. Martin Dempsey. It was trading in the bilateral relations between the two armies and ways to develop the American aid program planned for the Lebanese Army.

Dempsey expressed his appreciation for the role of the Lebanese military, and his country’s readiness to strengthen their capabilities in the areas of armament, training and logistics.

On the other hand, congratulated the Kahveci, General Dempsey on his new position, expressing his thanks to the great interest in the situation of the Lebanese army.

Kahveci was held a meeting with the commander of Central Command, Gen. James Mattis, and the pillars of the Special Forces, where he was briefed on the organization of these forces and their missions and their various activities and areas to take advantage of its potential for the units of the Lebanese army. Also met with Deputy Director of the agency defense cooperation and military Gonay Richard.

On the other hand, met the commander of the army both the Deputy Secretary of State William Burns and Assistant Secretary of Defense for Public Diplomacy Michele Flournoy, and Senator John McCain and Senator Howard Berman and Darrell Issa, a group of congressmen. It was emphasized during the meetings on the importance of the historical relationship between the two peoples and armies, friendly, and the efforts to which the Lebanese army to maintain the stability of Lebanon and the Middle East in general.

Also, the visit included a dinner hosted by Lebanese Ambassador Antoine Chedid in honor of the Armed and the accompanying delegation, in the presence of Gen. Dempsey, and a number of U.S. officials and activists of the Lebanese community in the United States.