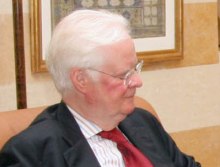 UN Special Coordinator for Lebanon Michael Williams told Al-Jumhuriya newspaper it is unlikely that Israel will wage war on Lebanon, adding that Lebanon is “probably the only country in the world whose sovereignty is violated almost every day.”

He said what is important for Israel is that the issue of Hezbollah and its arms is resolved because “in all countries, the state completely controls its territories and its arms, while the situation in Lebanon is different.”

He added that Lebanon’s commitment to UN Security Council Resolution 1701 is “excellent.”

He commented on the recent attacks against UNIFIL troops, saying that he was worried that no one has been arrested.

All countries participating in UNIFIL want to know who is behind such attacks, he added

Commenting on the Syrian situation he predicted that the uprising, which has been ongoing since mid-March, will not spill into Lebanon.

“The crisis in Syria will not be transferred to Lebanon…because Lebanon is different than Syria since [the former is a democracy .”