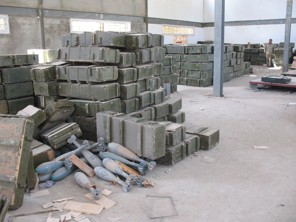 TRIPOLI, Libya — Crates of mortar shells sit unguarded and empty boxes for missiles to blow up tanks and bring down airplanes are strewn about arms depots around the Libyan capital.

Former rebels say they took some ammunition for the fight against Moammar Gadhafi, but U.S. officials and others have expressed fears Libya’s weapons could fall into the wrong hands.

The six-month civil war that ended Gadhafi’s 42-year rule and sent him into hiding also threw open the gates to his regime’s extensive armories. The country’s new leaders, who are struggling to establish a government, have failed to secure many of the caches, making them free game for looters, former rebel fighters or anyone with a truck to carry them away.

Since Gadhafi’s fall last month, American and U.N. officials have warned that the failure to control Libya’s weapons could destabilize the whole of North Africa.

Last week, U.S. Secretary of State Hillary Rodham Clinton called on Libya’s new leaders to secure the ousted regime’s weapons. “They still have a huge hill to climb,” Clinton said. “But they are working with the international community to secure both chemical weapons stockpiles as well as conventional weapons.”

However, visits by The Associated Press to weapons caches around Tripoli show that many remain poorly guarded and have already been heavily looted. About a dozen rebels wandered around one site the AP visited on Wednesday, where a large hangar was strewn with the boxes of missing weapons. Rebels at another site were leaving with a load of tank shells they said they were taking to a safe place for storage. They acknowledged, however, that they’d found the site unguarded.

It remains unclear how many weapons have been uncovered in Tripoli since Gadhafi’s fall, said Peter Bouckaert of Human Rights Watch, who has been searching the city for them.

Lots of munitions appear to have been hidden in civilian buildings to avoid airstrikes by NATO, which bombed regime military targets under a United Nations mandate to protect civilians.

“The problem is that the locals usually find out first and by the time we arrive and we can get some guards there, a lot of the most dangerous weapons have already been taken away,” he said.

A green sign at the entrance of a site the AP visited Wednesday said the facility belonged to the Libyan Education Ministry. The large hangar was strewn with hundreds of crates of mortars and tank shells.

Empty boxes of rifle ammunition and the anti-aircraft guns the former rebels fixed to the backs of trucks to fight Gadhafi’s soldiers were scattered on the floor. Among them were dozens of long skinny boxes for missiles — all of them empty.

Numbered codes on the boxes and packing slips inside indicated some were Russian-made anti-tank missiles. Others held shoulder-fired surface-to-air missiles designed to bring down airplanes, helicopters or drones.

Salim Badi, a rebel who said his brigade came the day before to secure the site, said he’d been there 10 days earlier and found many more weapons.

He guessed the rebel fighters had taken the rifle and anti-aircraft ammunition, but doubted they’d taken the missiles.

“None of the rebels would take this stuff,” he said, standing over an open box of tank shells. “These here, we don’t even know what to do with them.”

Bouckaert said the missing missiles could be used to down airplanes.

“If these weapons start flooding around, it’s an absolute disaster for commercial flights in this region,” he said.

Ahmet Uzumcu, director general of the Organization for the Prohibition of Chemical Weapons, said his inspectors left the country in February when the anti-Gadhafi uprisings started and will return “when the conditions allow us.”

Uzumcu said Wednesday he had heard from sources that the “remaining stockpiles of chemical weapons are secured.” He did not identify his sources.

In 2004, Gadhafi agreed to dismantle his weapons of mass destruction, and his regime underscored its commitment by using bulldozers to crush 3,300 unloaded bombs that could have been used to deliver chemical weapons.

But more common munitions, like mortars and tank shells, could be used to make roadside or car bombs by anyone wishing to fight Libya’s new government.

“If people want to mount an insurgency against the new rebel government … all they have to do is drive some trucks into some of these buildings and they can remove enough to fight an insurgency for years,” he said.

Rebels were leaving a second site the AP visited Wednesday with a large truck full of crates of mortars. Fighter Abdel-Hamid al-Koti, 30, said his group would cart the munitions back to their hometown of Misrata for safekeeping.

Inside, a hangar with four large storerooms stood behind a row of building supplies stores and next to a house with grapevines growing over the entryway.

One room held hundreds of crates of tank shells. Another was full to the ceiling with mortars. Yet another contained thousands of land mines.

The remains of hundreds of empty munitions boxes littered some of the rooms and the sandy alley outside.

Al-Koti said he didn’t know how many munitions had been taken from the site before his group arrived or who took them.

“When we came today, this is how it looked,” he said, gesturing at the empty weapons crates. “We didn’t find anyone here.”

Photo: Large mortar shells sit unguarded, and boxes that once held anti-aircraft missiles and other heavy weapons are strewn about arms depots around Tripoli on Wednesday Sept. 7, 2011. Former rebels say they’ve taken some ammunition for the fight against supporters of Moammar Gadhafi, but U.S. officials and others express fears the weapons could fall into the wrong hands.