Bashar has to go: No Legitimacy for the Illegitimate 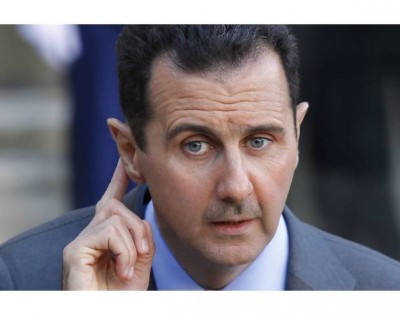 One of the most popular expressions of the Lockian idea of “natural rights” can be seen in the preamble to the US declaration of independence written by Thomas Jefferson: “We hold these truths to be self-evident, that all men are created equal, that they are endowed by their Creator with certain inalienable rights, that among these are life, liberty and the pursuit of happiness.”

The above simply means that it is not up to government to offer its populace personal rights since these are among the bundle of rights that cannot be alienated from the individual. No government can take away that which is embedded into citizens by virtue of birth and to act otherwise is a gross act of hubris and egregious exploitation. When the state adopts policies to take away from people part or all of their natural rights then the state is acting against the will of the governed whose welfare it is supposed to enhance. Such acts of diminution of the rights of citizens are best described as immoral, unethical, exploitative and constitute justifiable uprisings against the ruler whose acts have violated all accepted responsibilities of a governor.

Unfortunately, history is replete with states that have acted as authoritarian rulers, absolute monarchs, brutal dictators and autocrats. Yet the movement towards more democracy and responsible government got its biggest boost with the American and French revolutions of over 235 years ago. Many philosophers and political scientists have argued that the spread of democracy is probably the single best achievement of the 20th century. Alas this glorious trend was not able to find even a toe hold in the Arab world until the onset of the Arab Spring that started in Tunis, spread to Egypt, Libya and Yemen then Bahrain and Syria not to mention the defensive moves in Morocco, Jordan and possibly Iraq and Palestine.

Tunis and Egypt have already started the hard work of establishing working democracies as soon as their previously strong autocratic regimes collapsed, Yemen and Libya seem to be close to uprooting the dictatorial regimes of Qaddafi and Saleh while the Bahraini demand for reform appears to have been squashed by the Saudi monarchy with the acquiescence of the rest of the GCC. But besides Bahrain, the real paradox so far has been the courageous and popular Syrian uprising. It has been over 5 months since the people of Dara’a took to the streets to send a message to the Syrian Ba’ath that forty years of suppression, exploitation and expropriation of natural rights is enough. The spark of Dara’a spread like a wild fire to the suburbs of Damascus, to Homs , Hama and their environs, to Deir Ezorr, Jisr Alshughur, Banias and Latakia among other places. The civilian protestors were met in all cases with the full force of the Syrian army whose tanks have demolished many residential quarters and whose snipers and military have already killed over 2000 civilians; men women and children, not to mention the tens of thousands of injured and the over 10,000 rounded up for interrogation and torture. It is ironic that the same army that has failed to fire one bullet in almost forty years to liberate the Golan Heights was willing to butcher its own citizens in the name of resistance. As all this blatant brutality by the Syrian dictatorship was going on not one of the Arab governments issued as much as a statement of moral support to the insurgents when each of these regimes did not hesitate to support the Tunisian, Egyptian, Yemeni and Libyan uprisings. The deafening Arab silence was finally broken a fortnight ago when Saudi Arabia issued a statement asking the Syrian authorities to stop the bloodshed. This lukewarm support by Saudi Arabia was followed by expressions of support for the Syrian insurgents by other Arab governments and the Arab League but not by Lebanon. The West on the other hand has continued to pressure Syria to stop the killing through the Presidential Statements of the Security Council, through more severe economic sanctions and through an outright call for Mr. Assad to step down.

The official Lebanese position vis a vis the Syrian uprising will come back to haunt it but it was to be expected from a country whose President was unconstitutionally elected and who has often made it clear that his allegiance to Damascus is his priority. In addition to the above the current PM, Najib Mikati and his brother Taha, are known to have strong financial ties to the Syrian regime through Syriatel and Sami Makhlouf president Bashars’ cousin. Obviously no one needs to be reminded that Mr. Mikati is the symbolic head of a cabinet that came to power through the machinations of Hezbollah whose military and financial strength depend on smuggled missiles and other ammunition originating in Iran through Syria.

Despite all of this less than overwhelming support of the Arab regimes for the Syrian people in their greatest hour of need the Syrian Revolution is still gaining strength and the autocratic and brutal dictatorship led by Bashar Assad is struggling to find a way to survive by promising all sorts of reforms including a multiparty political system. How convenient to become a reformer when your survival depends on it, this is political expediency par excellence. Mr. Assad fails to understand that there is no such thing as legitimacy of the illegitimate. Dictatorships are often born in blood, fear, exploitation and usurpation of that which cannot be stolen since it is inalienable. Every single dictatorship will eventually end ignominiously simply because all are rooted in illegitimacy and sooner or later the people will lose the fear of the ruthless security machine that is set up to protect the dictator by pretending that the authoritarian regime knows best what is good for the multitudes when in effect all of the states’ acts are dedicated to the glory of the dictator and his entourage. Mr. Assad is not loosing legitimacy since he never had it to begin with and the governed have the legal right and the moral authority to establish a regime that respects their “natural rights”

It is a foregone conclusion that the Syrian uprising will eventually free itself from the inhumane grip of the Syrian Ba’ath but the price of that liberty is subject to the acts of Bashar Assad. He will either drag Syria into a Libyan style conflagration or he will decide that it is time for the Syrian people to rule themselves. Bashar Assad must go, all dictatorships must end and this is the time to end a forty years old cruel dictatorship.