Protests on the rise in Damascus followed by mass arrests 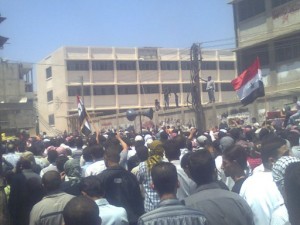 Syrian armed forces have arrested several people after demonstrations against President Bashar al-Assad’s regime were held across Damascus, rights activists said on Monday. On Saturday, the military arrested at least 26 people in the Damascus neighborhood of Jawbar, many of whom were returning to their homes, said the Observatory.

“The army on Sunday arrested nine people in the district of Hajar al-Aswad and many others in Sahnaya,” a suburb south of Damascus, said Rami Abdul Rahman, head of the London-based Syrian Observatory for Human Rights.

“Protesters demanding the fall of the regime marched on Sunday night in Hajar al-Aswad … in response to a campaign of arrests carried out earlier by the army in the capital,” he told Agence France Presse by telephone.

As part of the protests, “more than 300 lawyers gathered at the courthouse in Damascus calling for the release of arrested lawyers and prisoners of conscience,” he added.

Security forces have already carried out sweeping arrests in other parts of the capital, including Rokeneddine and Qaboun, after erecting barriers around the protest hotspots to isolate them.

The arrest campaign is part of a brutal crackdown launched in response to pro-democracy protests that broke out in mid-March, killing at least 1,483 civilians and 365 troops, according to rights groups.

At least 12,000 people have been arrested and thousands have fled to neighboring Turkey and Lebanon, rights groups say.