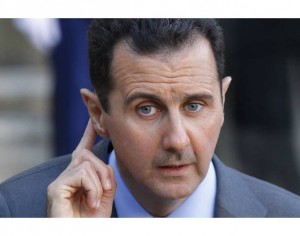 Syria’s government has endorsed a draft law that it says will allow the formation of political parties alongside President Bashar Assad’s ruling Baath Party, part of a series of promised reforms that the opposition has dismissed as largely symbolic. He has coupled his pledges of reform with a deadly crackdown on protesters that activists say has killed at least 1,600 people.

The development came as security forces detained dozens of people in the capital Damascus and several other cities in search for anti-government protesters and regime opponents, activists said Monday. The National Organization for Human Rights in Syria said a seven-year-old child, a boxing champion and a writer were among those arrested.

The multiparty bill, approved by the Cabinet late Sunday, follows other concessions Assad has made as part of his efforts to quell more than four months of protests against his regime.

The revolt has only grown more defiant in the face of the government response, and protesters have shifted their demands from political change to the outright downfall of the regime.

The draft law, which still needs parliamentary approval, would allow for the establishment of any political party which is not based on religious or tribal lines, or discriminates due to ethnicity, gender or race, the state-run news agency said.

Assad’s ruling Baath Party, which calls for “unity, freedom and socialism,” has held a monopoly over political life in Syria for decades.

A key demand of the protest movement is the abolishment of Article 8 in the Syrian constitution which states that the Baath Party is the leader of the state and society.

Lawmaker Mohammad Habash told The Associated Press on Monday that the bill still needs to be endorsed by parliament and will likely be presented for debate at the next session on August 7.

He said the bill in itself was positive but that some articles of the constitution must be amended first, including article 8.

Assad, who inherited power in 2000 after the death of his father, President Hafez Assad, has made a series of overtures to try to ease the growing outrage. He lifted the decades-old emergency laws that gave the regime a free hand to arrest people without charge, granted Syrian nationality to thousands of Kurds – a long-ostracized minority – and issued several pardons.

But the concessions failed to sap the momentum of the protest movement, which dismissed them as either symbolic or far too late.

As a first step, the protesters are demanding an immediate end to the security crackdown and the release of thousands of people who have been detained in recent months.

The government, however, has shown no signs of letting up in its efforts to crush the uprising.

On Monday, security forces tightened their siege of neighborhoods in central Syria’s city of Homs, sending military reinforcements and cutting mobile and land lines in the Khaldieh and Bayada districts, activists said.

The heavy deployment of troops and army vehicles sparked concerns of renewed military operations. An activist in Homs said there were fears of a large scale military operation to try and force an end to the unrest there before the Muslim holy month of Ramadan, which begins next week, during which protests are expected to gain momentum.

The activist spoke on condition of anonymity for fear of reprisals.

Ammar Qurabi, who heads the National Organization for Human Rights in Syria, said among those arrested in Homs was one of Syria’s boxing champions, 26-year-old Mahmoud Kaadi, who was picked up while training. Seven-year-old Naim Qteifan was detained three days ago in the southern town of Daraa, Qurabi also said in a statement.

The Local Coordination Committees, which monitors and helps organize anti-government protests in Syria, also reported a “massive wave of raids and arrests” in the Hajar Aswad district of Damascus.

On Sunday, Syrian troops stormed a northwestern village and made sweeping arrests in the region and in the capital Damascus.

Also Sunday, the president replaced the governor for the eastern oil-rich province of Deir el-Zour, which has seen intense protests calling for the downfall of the regime. Since the uprising began, Assad has removed several governors in tense provinces.