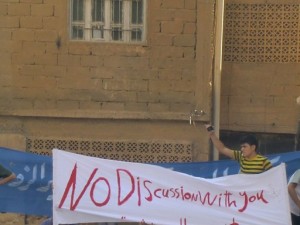 The Syrian army Sunday took control of several neighborhoods in Homs, the scene of deadly violence last week, while security forces conducted a spate of arrests in Damascus.

More than 50 people have been killed in the past week in Homs, 160 kilometers north of Damascus, either by army gunfire or in clashes between rival groups of demonstrators, rights activists have said.

The troops stormed a northwestern village Sunday and made sweeping arrests in a region where the army has been conducting operations for weeks to crush growing dissent against the regime.

Syrian authorities have unleashed a brutal crackdown in an effort to put down a four-month-old uprising, and activists say more than 1,600 people have been killed since mid-March. The government blames the unrest on terrorists and foreign extremists, not true reform-seekers.

The Local Coordination Committees, a group that helps organize and document the protests, said tanks shelled a telecommunications tower and cut electrify and water early Sunday in Sarjeh village, in Idlib province.

The LCC also said authorities detained scores of people in the capital, Damascus, and its suburbs late Saturday.

The detainees included renowned movie producer Shadi Abu-Fakhr who was arrested in the Syrian capital, a Syria-based activist said on condition of anonymity for fear of government reprisals.

The regime has banned nearly all foreign media and restricted coverage of the uprising, making it nearly impossible to independently verify events on the ground.

Also Sunday, President Bashar Assad replaced the governor for the eastern oil-rich province of Deir el-Zour, which has seen intense protests calling for the downfall of the regime. Since the uprising began, Assad has removed several governors in tense provinces.

Samir al-Sheik, who was a Damascus-based police brigadier general, was sworn in for the new post in front of Assad, the state-run Syrian Arab News Agency said. He replaces Hussein Arnous who has been named governor of the southern province of Quneitra.

Elsewhere, hundreds of people were arrested in the Damascus neighborhoods of Qaboun and Roken Eddine, which has a mostly Kurdish population.

Rami Abdel Rahman, head of the London-based Syrian Observatory for Human Rights, said: “Soldiers armed with automatic rifles are deployed at the main routes into Qaboun and in front of mosques.”

“The security forces also searched homes looking for weapons, and made some arrests,” he added.