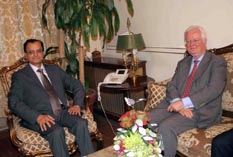 U.N. Special Coordinator for Lebanon Michael Williams announced on Monday following talks with Foreign Minister Adnan Mansour that he will address the issue of Lebanon’s demarcation of its maritime border at the United Nations on Thursday.

“Lebanon must have access to its natural resources and must benefit from them and I want to see there is a law on exploration and exploitation fully implemented and foreign oil companies coming to Lebanon.” Williams said

Williams is scheduled to head to New York on Tuesday where he will discuss the sixth report on the implementation of U.N. Security Council resolution 1701 at the international organization’s headquarters on Thursday.

“It’s not unusual in many countries in the world to have disputes over maritime boundaries,” Williams said