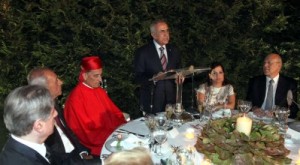 President Michel Suleiman said on Saturday night during a dinner that he hosted at his residence in Amchit in honor of Maronite Patriarch Bechara Boutros al-Rai that stability in Lebanon requires “a political will” from its parties.

“We succeeded in preserving stability in the past years, which resulted in economic growth. Nothing stops us from preserving this stability despite all dangers surrounding us,” he said

“We should refer to the legitimate institutions to resolve any dispute,” Suleiman added.

He also said that the Lebanese people are tired from internal disputes , aspire to build the state institutions and are now looking for stability and sustainable development.

The president also said that Lebanon needs real reconciliation between its parties, adding that the Lebanese system respects diversity and is keen to preserve compromise between its people.

The patriarch is on a spiritual visit to the district of Jbeil, where Amchit is located. The dinner was also attended by Lebanon’s top officials, political leaders and religious authorities.

Suleiman stressed on Saturday that he will seek to launch a national dialogue with the Lebanese leaders to fortify Lebanon.

He addressed patriarch al-Rai saying: “Since day one you have worked on gathering the Maronite leaders and called for an Islamic-Christian summit to implement dialogue and co-existence.”

Suleiman remarked that during the past few years “We were able to achieve stability… And committed ourselves to the democratic principle of rotating power.”

“However, we didn’t forget to seek the social justice,” he stressed.

Patriarch Rai on his part urged the president, Speaker Nabih Berri and Prime Minister Najib Miqati to go forward in their partnership.