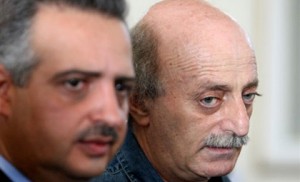 They discussed the general political situation and the latest developments according to the report. However, the report did not elaborate any further.

LBC reported that Arslan’s brother-in-law Marwan Khaireddine will replace him as Minister of state.

Arslan who was appointed as minister of state in the cabinet of PM Nagib Mikati resigned hours after the PM announced the formation of the cabinet. He accused Mikati of lying and causing a rift between him , Jumblatt and MP Michel Aoun.

Ever since Mikati was appointed as PM Designate , Arslan was always insisting on being allocated a sovereign ministerial portfolio . Ministries of state are usually used as a filler to complete the lineup of the cabinet.

Minister of the Displaced Alaaeddine Terro , who is a member of Jumblatt’s PSP told “Voice of Lebanon” yesterday that negotiations with Arslan regarding naming a replacement minister were going on but have not been finalized yet.

Arslan did not attend the parliament session that was aimed at granting the cabinet its vote of confidence. His absence reportedly angered the Hezbollah-led March 8 alliance but was praised by his his own supporters in the Aley region. Maarouf , a resident of Aley and  an Arslan supporter told Ya Libnan”: El Mir Talal Arslan proved he is a man of his word . He warned Mikati on several occasions that he does not want a state ministerial post and that he won’t grant his voice of confidence if he does not get a sovereign ministerial portfolio and that is exactly what he he did. This man is not afraid of taking a stance.”