Mikati: There is national consensus on UNIFIL and its mission 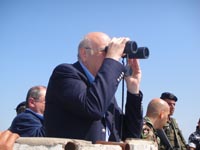 Lebanese Prime Minister Najib Mikati visited south Lebanon for the first time since his cabinet secured the vote of confidence to meet with the United Nations Interim Force in Lebanon (UNIFIL) command in a show of support to the UN peacekeeping forces.

The Prime Minister expressed strong appreciation for UNIFIL’s contribution to peace and stability in southern Lebanon.

“There is national consensus on UNIFIL and its mission and I am here to stress that again in unequivocal terms,” Prime Minister Mikati said. “The people of Lebanon, and I personally, have deep appreciation for the work you are doing, hand in hand with the Lebanese Armed Forces, to maintain the peace and quiet for this part of the country that has suffered from many years of conflict.”

“My government is committed to the implementation of UN Security Council resolution 1701,” he added.

The Prime Minister reviewed a Guard of Honour presented by UNIFIL troops. Then the Prime Minister received an operations briefing on UNIFIL and discussed with Major-General Asarta the activities undertaken by the peacekeepers in collaboration with the Lebanese Armed Forces.

Major-General Asarta said: “Your presence here today, so soon after taking office, in and of itself constitutes a strong statement of support for our mission. I have no doubt that this will greatly encourage UNIFIL peacekeepers as well as our strategic partners in the Lebanese Armed Forces to further build on the steady gains in the security situation over the past almost five years since the cessation of hostilities came into effect.”

“The support of the Government of Lebanon is very important for the success of our mission,” the Force Commander said.

He said that the visit is a message that the government will not take lightly the issue of Lebanon’s sovereignty, National News Agency reported.

Mikati is welcomed by the residents who support the formula of the unity of the Lebanese people, army and Resistance, Fayyad also said.

Mikati’s cabinet, which was formed on June 13 and dominated by the Hezbollah-led March 8 alliance, was granted parliament’s vote of confidence July 7.