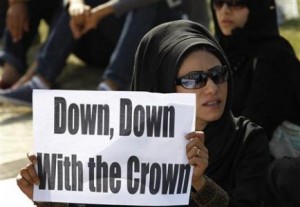 Bahrain has lifted martial law, a step the authorities hope will help to restore normalcy in the kingdom rocked by political upheaval following anti-government protests.

Bahrain imposed emergency rule in mid-March, giving the military powers to suppress demonstrations led by the country’s Shia majority against the minority Sunni rulers. The protesters were inspired to rise up by other revolutions sweeping Arab nations around the Middle East and North Africa.

With the end of martial law on Wednesday, tanks and soldiers withdrew from the centre of Manama, the capital, but numerous police checkpoints remained around the city.

The move came a day after King Hamad bin Isa al-Khalifa offered a national dialogue with opposition figures on reforms.

“The end of the national security law and announcement of dialogue are both positive. It will be a shame if anyone is negative about it,” Jamal Fakhro, a Bahraini lawmaker, said.

But there were reports of security forces attacking people attempting to stage fresh anti-government protests around the capital following the lifting of martial law.

“People are trying to gather but they are attacking them,” an activist told the AFP news agency, on condition of anonymity.

She mentioned attempted protests in villages including Diraz, Bani Jamrah and Karzakan.

Another activist reported a heavy security presence in Bani Jamrah and said security forces had fired tear gas at protesters who dared to venture into the centre of the village.

He added about 30 women had gathered in front of his house, but security forces used batons and tear gas to disperse them.

“With the end of the emergency situation, the security would not be here but they still are,” said Ali Zirazdi, a 30 year-old man, who said police had fired tear gas after a few hundred people gathered in the predominantly Shia village of Diraz.

“The security presence is even stronger and their approach now is as soon as they hear of any protest in advance, they come down to stop it from happening,” Zirazdi added.

At least 30 people were killed since the protests for more rights and greater freedoms began in February in the island nation, which hosts the US Navy’s 5th Fleet.

Bahrain invited 1,500 troops from a Saudi-led Gulf force to help suppress the unrest when emergency rule was imposed.