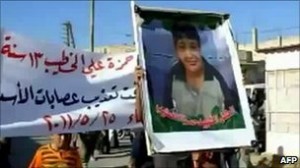 Syrian President Bashar al-Assad should face trial at a UN court over the “brutal” treatment of his people, Australia’s foreign minister says.

Kevin Rudd said incidents such as the alleged torture and murder of a 13-year-old boy by security forces had robbed Mr Assad of any legitimacy.

President Assad invited the boy’s family to meet him and promised an inquiry, state television said.

Activists say more than 1,000 people have died in weeks of protests.

The 13-year-old boy, Hamza al-Khatib, has become an icon of the anti-government uprising in Syria, says the BBC’s Jim Muir.

Activists say he was detained by security forces and tortured to death, while the authorities insist he was shot dead during a demonstration.

Mr Rudd called it a “brutal act” and accused Mr Assad of taking “large-scale directed action” against his own people.

“I believe it is high time that the Security Council now consider a formal referral of President Assad to the International Criminal Court,” said Mr Rudd.

Martyr to both sides

US Secretary of State Hillary Clinton said the boy’s death showed the regime was deaf to the voice of its people.

“I can only hope that this child did not die in vain but that the Syrian government will end the brutality and begin a transition to real democracy,” she said.

Hamza al-Khatib is being hailed as a martyr, and his picture is now held aloft at demonstrations around the country and abroad.

He is being compared to the Tunisian market-seller Mohamed Bouazizi and Iranian pro-democracy protester Neda Agha Soltan whose deaths galvanised anti-government campaigns.

Hamza is also being called a martyr by the Syrian authorities.

State TV said the teenager’s father and family were invited to meet President Assad, and they were quoted as saying he “engulfed us with his kindness and graciousness”.

A man who identified himself as Hamza’s father said: “The president considered Hamza his own son and was deeply affected.”

The boy went missing after a demonstration at an army barracks near Deraa in the south at the end of April.

Activists say he was captured and tortured to death, and that his mutilated body was handed back to his family four weeks later.

The government says he received three fatal gunshot wounds during the protest and died on the spot, but there was a delay in handing over his body because he was not identified.

Syrian state TV aired a programme about the teenager on Tuesday night in which a judge said death was due to “a number of bullet wounds without any indication of torture or beating on the body”.

Coroner Akram al-Shaar blamed the state of the body on decomposition, adding: “There are no marks on the surface of the body that show violence, resistance or torture.”

Human Rights Watch (HRW) published a report on Wednesday that said “systematic killings and torture by Syrian security forces” in Deraa could qualify as crimes against humanity.

“They need to stop – and if they don’t, it is the Security Council’s