Israel accuses Iran of being behind the border protests 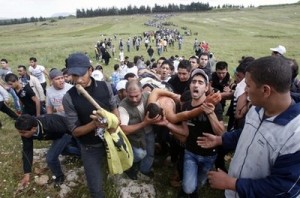 Mordechai also confirmed that the IDF fired at a crowd of Lebanese protesters who approached the border with Israel near Maroun al Ras . The spokesman did not provide details on the number of casualties, but Lebanese sources said there had been ten fatalities.

Israel has also earlier accused the Syrian government of organizing the protest in the Golan Heights area to divert attention from the Syrian uprising that started 2 months ago and resulted in the killing of over 850 protesters.

May 15 marks the “Nakba Day.” Nakba, meaning catastrophe in Arabic, and marks the period when more than 700,000 Arabs were displaced from their homes during the fighting following the creation of Israel in 1948.

Photo: Protesters carry a Palestinian boy after he was injured when Israeli soldiers opened fire at protesters who approached the border with Israel during a rally in the southern border village of Maroun el-Rass, Lebanon, Sunday, May 15, 2011.