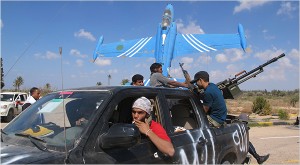 Rebels in the contested western city of Misurata stormed the city’s airport on Wednesday afternoon, swarming over the grounds from the south and east and reclaiming it from the military of Col. Muammar el-Qaddafi.

Seizing the airport in Misurata, Libya’s third-largest city, which has been under siege for nearly two months, marked one of the most significant rebel victories in the Libyan conflict.

The airport and its approaches were the last remaining pieces of significant terrain in the city to be controlled by the Qaddafi soldiers.

With these soldiers pushed back, the western area of Misurata appeared by nightfall to be out of range of the most common of the Qaddafi forces’ heavy weapons, including self-propelled artillery, Grad rockets and 120-millimeter mortars, with which the loyalists have fired cluster munitions.

“Now we are safer,” said one rebel commander, a former army officer who had defected to join the rebels when the uprising began in February, as he strutted through the airport’s departure terminal, where the abandoned green uniforms of Qaddafi soldiers rested across several luggage carts.

The rebel commander added that the rebels, who now have physical control of all of Misurata, had given the citizens of Libya something that could endanger Colonel Qaddafi’s hold on Tripoli, Libya’s capital. “Any victory we make here will encourage the people of Tripoli,” he said. “They will say, ‘Qaddafi is weak. Why can he not keep Misurata?’”

By evening, after what seemed the last pockets of resistance at the airport had been silenced by rebel fire, Misurata was in celebration. Ambulances roamed the city, sirens wailing, as convoys of machine-gun trucks drove past with gunmen cheering and occasionally firing in the air. “God is great!” they chanted.

In western Misurata, where many families have been hiding, residents emerged by hundreds, then thousands. Once lightly trafficked roads were clogged by traffic jams.

The outpouring of emotion was understandable for a city that has endured fierce house-to-house fighting and absorbed week-after-week shelling and ground-to-ground rocket fire.

It also risked being premature. At the city’s two eastern fronts, Qaddafi soldiers were believed to remain within Grad rocket and artillery range of several neighborhoods and the city’s seaport, which is its sole route for medical evacuation and resupply.

The city’s roughly 500,000 residents remain isolated and in need of food and medical aid.

The commander, who asked that his name be withheld to prevent retaliation against family members elsewhere in Libya, also said that the rebels were worried that the Qaddafi military had regrouped and gathered reinforcements about 25 miles away, and might counterattack any time.

Nonetheless, the events at the airport underscored the rebels’ new momentum this week, and led to a palpable lightening of the city’s mood.

Late last month, Misurata’s rebels forced the Qaddafi military from the city’s center in a bloody building-by-building fight. Since then, the lines had largely been static. The Qaddafi forces had taken up defensive positions at points around the city, and shelled it at will.

On Sunday, after a stepped-up campaign of air strikes by NATO warplanes, which have been bombing military targets under a Security Council mandate to protect civilians, the Qaddafi lines began to break anew.

The rebels, riding their machine-gun trucks and fighting on foot, pushed westward several miles by Monday, reaching the outskirts of Ad Dafiniyah.

On Tuesday the rebels then attempted a plan model in part on their successes in April on Tripoli Street, one of the city’s main boulevards.

There, by gradually building barricades of sand and blocking roadways with shipping containers and large cargo and dump trucks, they had cut off their enemies’ routes of reinforcement and resupply. Then, building by building, they tried the same tactic, writ small—cutting of structures and storming the Qaddafi soldiers trapped inside.

Over the weekend, rebel commanders said they had partly enveloped the airport and would soon try to block off an important road that led out, isolating the Qaddafi soldiers garrisoned there. An effort to do that on Tuesday ended in a bloody battle, as the loyalist forces fought to keep the road open.

In an interview Tuesday night, the city’s senior rebel commander, Salaheldin Badi, said the rebels would try again soon. “We need to make many attacks from many directions, to find the best way and to cut them off,” he said.

On Wednesday, as the rebels attacked again with hopes of blocking the road, the will of the Qaddafi forces appeared to have broken. After an intense eruption of gun and mortar fire in the late morning, the loyalists bolted, in many places leaving behind vehicles and uniforms.

A journalist accompanying rebels who were passing through the fence on the airport’s southern perimeter saw abandoned Libyan army tanks and a deserted bazaar formerly occupied by Qaddafi troops.

Rebels were also looting the terminals’ few office buildings, though after the airport had served as a Qaddafi military position for almost two months, there seemed to be little to steal. A few groups of rebels departed with their pick-up trucks stacked with little more than dingy office chairs.

A short while later, as the commander drove back toward the city’s center, he paused at a highway overpass on city’s southern side.

The overpass — known in Misurata simply as “the bridge” — had for weeks marked the limit of the rebels’ advance. Watched over by Qaddafi snipers, machine gunners and mortar crews, it had been an area no rebel dared to pass under, much less drive on.

The commander stopped the truck in the middle of its span. He pointed in one direction — toward Sirte, Colonel Qaddafi’s tribal home. Then to the other, toward Tripoli.

“For two months we could not be here and today it is fine,” he said, of the bridge. “I think now Qaddafi cannot come to Misurata again. He took his lesson here.”

Then he amended his statement. “Maybe he will still try to come again,” he said. “He does not care about Libyans. Maybe he will send more Libyans here to die.”