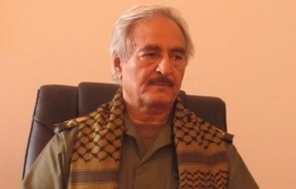 Khalifa Hiftar spent the past 24 years in the United States but returned abruptly to Libya last month to join the rebels fighting to topple Moammar Gaddafi. Now, as the newly installed field commander of the fledgling force, this ­67-year-old is trying to make fast improvements to fighters who need more training, more weapons and, he says, more support from the United States.

“A lot of things are going to change,” Hiftar said, sitting behind a large wooden desk at the military command headquarters in this rebel stronghold, about 100 miles from the erratic front line where Gaddafi loyalists and rebel fighters move forward and back. “I will train them to follow orders and to be under control. The real battle will start when all our forces regroup.”

The challenge is a difficult one. So, too, is Hiftar’s place among the rebels. Some say he is trying to take a leading role late in the game, after years out of the country. He is also vying with Abdul Fattah Younis, commander of the armed forces here, for leadership of the rebel military. Younis was Gaddafi’s interior minister and commander of the Libyan special forces, but broke ranks in February to join the rebels.

Hiftar also used to be on Gaddafi’s side. He took part in the 1969 coup that brought the Libyan leader to power and, in the 1980s, became a hero in Libya’s war with neighboring Chad. But he and Gaddafi split in 1987, and Hiftar made his new home in suburban Virginia, where, he said, he did what he could to support the Libyan opposition, and where the United States helped to “protect” him from Gaddafi.

“I used to lead the biggest force in eastern Libya; I’m known amongst the people and to the United States,” Hiftar said in his first interview since becoming field commander Friday. “Throughout the years, I’ve been waiting to seize a moment like this.”

Before he left his Falls Church home in mid-March, Hiftar said, he was contacted by the CIA and the U.S. ambassador to Libya, as officials in Washington, keen to find out what they could about the opposition, learned of his plans to return. The CIA declined to comment.

Hiftar said he asked the Americans for missiles, rockets, armored personnel carriers and reconnaissance vehicles. He received a hero’s welcome when he entered eastern Libya, but is frustrated that he hasn’t heard back from the United States about his request and is disappointed by the silence.

“I expected more from the country that I lived in and had personal help from,” he said in the Monday interview. “I have a decisive role in the revolution.”

Chris Stevens, a U.S. envoy who arrived in Benghazi last week to assess the rebels’ Transitional National Council and its support, has yet to meet with Hiftar. Hiftar has had no direct contact with NATO but said his son is among those speaking to NATO officials.

Hiftar attended military college with Gaddafi, but said that after he took power, Gaddafi quickly ran “off course” and became an egotistical leader.

Hiftar said Gaddafi abandoned him after the disastrous war in Chad. He found a haven in the United States, he said, working with other military defectors to form an opposition group.

Upon his return to Libya, Hiftar found a rebel army filled with untrained volunteers and defector soldiers that has proved to be disorganized, badly supplied and unable to hold ground.

Hiftar complained that a tapering of NATO airstrikes had allowed Gaddafi’s forces to regroup. And he said the strikes should again be U.S.-controlled, adding that they were more effective under American command. In spite of Washington’s insistence that it will not arm the rebels, he also called on the United States to supply “cutting edge” weapons for his troops.

Despite the challenges, Hiftar appeared confident in his new role, vowing to transform the rebel army from a ragtag team of erratic fighters into a force that could beat Gaddafi loyalists.

Hiftar did little to play down the rivalry with Younis. He pointed out that they had also attended military school together but said their paths had diverged. “He stayed with Gaddafi for 42 years and I defected 24 years ago,” Hiftar said, adding that Younis has no “effect” on his decisions or his forces.

“There was no control when our new operations started,” Hiftar said. “There’s going to be a commander to control things now.” WP