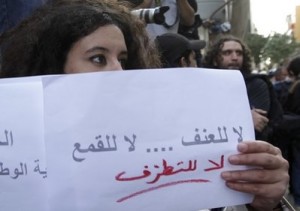 Eyewitnesses say hundreds of women and children are blocking a main coastal highway in Syria to protest the arrest of dozens of people from nearby villages in an ongoing crackdown.

The witnesses say up to 2,000 women carrying white cloths and olive branches are crowding the main motorway between the coastal cities of Tartous and Banias on Wednesday. The women demand the release of detainees from Bayda and Beit Jnad.

The witnesses spoke on condition of anonymity for fear of reprisals.

Protests erupted in Syria more than three weeks ago and have been growing steadily, with tens of thousands of people calling for sweeping reforms. AP

Photo: A pro-reform in Syria activist, hold an Arabic placard :”No to violence, no to oppression and no to fanaticism”, as she stands in front of the Syrian embassy, in Beirut, Lebanon, on Tuesday April 12, 2011.