Assad announced himself a dictator 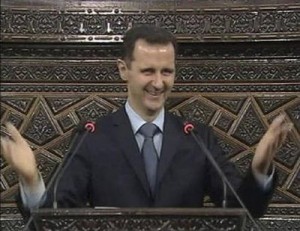 They laughed when he laughed.

Their hearts raced in anticipation, not over those much heralded reforms which failed to materialise – “Weren’t emergency laws abolished last week anyway?’ asked one – but over the excitement and grandeur of the occasion: the packed parliament, the crowds of cheering supporters and, of course, President Bashar al-Assad himself.

“He is a very good man, he is very strong,” said one of the young women, watching on the TV of a café in the wealthy Shaalan area of Damascus as Syria’s president prepared to make his first speech to the nation in the wake of unprecedented protests against the 40-year rule of his family.

It had been a fortnight that had witnessed the previously unthinkable: Images of protestors in the southern city of Daraa hauling down the statue of President Assad’s father Hafez, the ‘eternal leader’ whose 30-year rule over Syria instilled such fear that, even today, Syrians dare not speak his name.

Images, too, of Bashar’s smiling portrait being torn and kicked. Blood of citizens staining the streets of a country whose rulers promise stability, above all else, but whose security forces had killed more than 60 protestors in a week.

But for the ladies who lunch in Shaalan, the call from the streets of Lattakia, Homs, Daraa, Al Tall and even parts of Damascus, for freedom, an end to oppression by Syria’s security forces and for multi-party politics, was all, as their president stressed repeatedly, not a part of the country they know.

“Those problems are caused by outsiders, not Syrians. There are groups from Egypt, Iraq and America,” said the teacher, a stylish woman in her late twenties, with immaculate make-up, a low cut top and diamonte jewellery. “They want to create sectarian problems, but they will not succeed because we stand together as one in Syria.”

Yes, the president had for many years wanted to change the emergency law, the bedrock of the security state, which allows sweeping powers of arrest and years in secret detention on catch-all charges such as “weakening national sentiment” and “opposing the goals of the revolution.”

“He wanted to from 2005,” said the teacher, “but you must understand that many in Syria are not ready for the changes, we need time. As the president said, ‘It’s good to be quick, but not good to rush.'”

From the opening remarks of the speech and a further near dozen times, President Assad referred to the “conspiracy”, “plots” and “sabotage” targeting Syria from outside, of which the protests for change which have centred in the southern city of Daraa, “a border area”, were a part.

“The objective was to fragment Syria, bring down Syria as a nation to enforce an Israeli agenda,” said the president, a message that resonates with his supporters.

“Now we are paying the price for supporting the resistance in Palestine, Lebanon and Iraq,” said Noor, a 22-year-old student at Damascus University. “Syria has many ethnics and sects and we should protect our country form national division. We don’t want another Lebanon where they use freedom of speech to fight each other.”

But though he spoke much about the need to reform, with no clear timetable and no announcements of change, even government officials were left stunned by Assad’s speech.

“Thousands of people contacted me – top officials, deputy ministers, sons of ambassadors – saying, ‘You should expect big reform, you will be amazed’,” said Ayman Abdel Nour, a former Baath party reformer, now editor-in-chief of the All4Syria news agency. “After the speech they were all shocked. No-one dared write anything back to me.”

Abdel Nour said the president’s original speech had been scheduled for two days earlier but a decision was made to wait until the army and security forces could pacify Lattakia and Daraa, the scene of the largest anti-regime protests.

“He received a report from the head of intelligence and the army saying ‘We have finished, everything is calm and we are the winner.’ He then re-wrote the original speech late into the night.”

‘Some changes, but not reform’

Certainly the message coming to the media from the president’s office was to expect the announcement of major reforms, including lifting the state of emergency.

CNN got the same story, from Reem Haddad, a government spokeswoman.

“The regime rules through ambiguity. It is not capable of reform, that’s a simple fact of life,” said Andrew Tabler, a fellow at the Washington Institute for Near East Policy, who spent eight years working in Syria as a journalist and is the author of an upcoming book on the country.

“Bashar has support among the minority networks surrounding the Assad family which overlap the intelligence services and the military, so this galvanises the regime against what happened in Tunisia and Egypt,” said Tabler, but added it was a situation that could not last.

“Bashar does not feel he has to change. He might make some changes, but not reform. Yet the winds of change are blowing through the Arab world. Maybe these protests in Syria will not lead anywhere today but in the long term they are a problem for the regime.”

In the wake of the speech, American policy makers would be re-thinking Syria policy, said Tabler, a strategy that had previously sought to break Damascus’ ‘resistance axis’ – its alliance with Hezbollah, Hamas and Iran – through peace talks with Israel.

But with Assad tying his legitimacy as leader to his resistance against Israel through proxies, the US might now follow a path of expanding existing trade sanctions which target specific regime members, such as Rami Makhlouf, the president’s cousin and gatekeeper of the Syrian economy.

Pro-regime figures in Damascus framed Syria’s choices as “Bashar or chaos” and had duly welcomed the speech on behalf of the nation with “a sigh of relief” as the country once again got back to “business as usual”.

‘Fuel on the fire of the anti-regime protests’

But for those Syrians, young and old whose numbers are impossible yet to judge, who say they suffocate in the regime’s stability, finding neither bread nor freedom, jobs nor liberty, and who have seen their friends and family gunned down for demanding the same rights as Arabs in Cairo and Tunis, the speech was anything but a return to the norm.

“He said nothing and promised nothing. We were waiting for him to end the state of emergency, set free all political prisoners and establish a law for political parties,” said a young woman speaking over the phone from Daraa, the city at the centre of the uprising, which has now been sealed off to all media.

“Our people were killed in cold blood by the security forces but he didn’t apologise to them or their mothers. Rather it was as if he was speaking to the Arab summit, in language from the 1960’s. Next Friday we will call for a ‘Friday of Martyrs’. We will keep on demonstrating until we get freedom as in other countries. Today, I am demanding reform of the regime but after next Friday I can expect the people will ask for more.”

Wissam Tarif, a founding member of Insan, a human rights, democracy and development agency, who is currently gathering reporting in Syria said Assad had only thrown fuel on the fire of the anti-regime protests.

“Assad announced himself a dictator. He did not address the nation, he addressed the regime,” said Tarif. “People are angry and will continue to be angry.”

Within hours of Assad’s speech, several hundred residents of Lattakia took to the streets to protest for freedom.

Gunfire was heard and by evening activists in Syria had uploaded a video to YouTube datelined to the city showing a man lying flat on the concrete, blood pouring from the wound where a bullet had hit him square between the eyes.