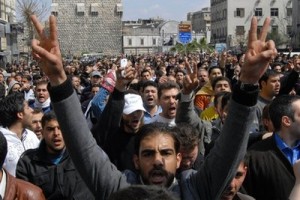 Security troops stormed a protest sit-in near the capital Damascus, arresting about 200 people in the midnight raid, activists said Saturday, the latest violence in the unrelenting crackdown on protests that have spread to this Mideast country.

The activists said up to 4,000 people were demonstrating in the town of Douma on the outskirts of Damascus when, around midnight Friday, electricity was cut and the protesters came under attack. The activists spoke on condition of anonymity fearing reprisals.

They said troops attacked the protesters with sticks and clubs, injuring several, but those reports could not be independently confirmed. An eyewitness who drove to Douma Saturday said there were no traces of a fight in the area and shops were open.

As calm returned to Syrian cities Saturday, a human rights activist said authorities released 70 political prisoners. The release was an apparent effort to appease the protesters and contain the fallout from a deadly crackdown on demonstrations that have gripped Syria for a week. Groups of detainees have been released earlier in the week as well.

Abdul-Karim Rihawi, who heads the Syrian Human Rights League, said most of those released on Saturday had been imprisoned at Saidnaya prison in a Damascus suburb where political detainees are usually kept. He said no further details were immediately available and there was no official confirmation.

But authorities also reportedly detained dozens of others during the violence as one of the Middle East’s most repressive regimes sought to quell demonstrations that exploded nationwide demanding reform.

The Douma midnight raid capped a day of a relentless government crackdowns on protests which dramatically spread to multiple cities across Syria. The once-unimaginable scenario posed the biggest challenge in decades to Syria’s iron-fisted rule.

Security forces opening fire on Friday shot dead more than 15 people in at least six cities and villages, including a suburb of the capital, Damascus, witnesses told The Associated Press. Their accounts could not be independently confirmed.

Funerals were under way Saturday across Syria for many of those killed the previous day.

Also Saturday, the state-run news agency said an armed group attacked an officers’ club in the city of Homs on Friday, killing one person and wounding others.

Videos posted on social networking sites Friday night showed protesters in Homs tearing down a large poster of Hafez Assad, the late Syrian president, over the entrance to the Officers Club. The footage could not be independently verified.

In the southern city of Daraa, protesters on Friday regained control of the al-Omari mosque — the epicenter of the past week’s deadly protests.

Tens of thousands had poured into Daraa’s central Assad Square after Friday prayers, many from nearby villages, chanting “Freedom! Freedom!” and waving Syrian flags and olive branches, witnesses said. Some attacked a bronze statue of Hafez Assad.

Troops responded with heavy gunfire, according to a resident who said he saw two bodies and many wounded people brought to Daraa’s main hospital.

After night fell, thousands of enraged protesters snatched weapons from a far smaller number of troops and chased them out of Daraa’s Roman-era old city, taking back control of the al-Omari mosque.

The accounts could not be immediately independently confirmed because of Syria’s tight restrictions on the press.

A Daraa resident said up to 2,000 people were holed up in and around the mosque on Saturday, adding security troops had retreated.

The Syrian government said 34 had been slain in Daraa before Friday, while the U.N. human rights office put the figure at 37. Activists said it was as high as 100.

In Damascus, the heart of Bashar Assad’s rule, protests and clashes broke out in multiple neighborhoods as crowds of regime opponents marched and thousands of Assad loyalists drove in convoys, shouting, “Bashar, we love you!”

The two sides battled, whipping each other with leather belts, in the old city of Damascus outside the historic Umayyad mosque, parts of which date to the 8th century. About two miles (three kilometers) away, central Umayyad Square was packed with demonstrators who traded punches and hit each other with sticks from Syrian flags, according to AP reporters at the scene. AP