ANALYSIS-Little U.S. can do to halt Syria violence

by yalibnan
1034
With virtually no leverage in Damascus , it is unclear how much Washington can influence events or whether it would even try unless there were mass casualties
Share: 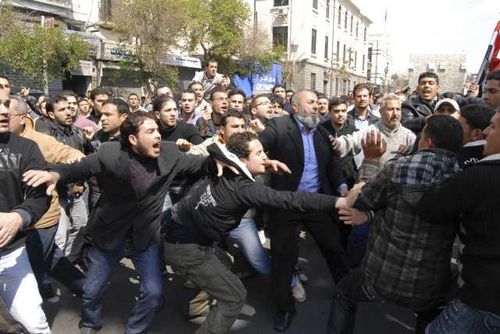 The United States is likely to stick to a cautious, hands-off stance toward the protests in Syria while it watches whether they spread widely or spark a brutal crackdown.

With virtually no leverage in Damascus — a U.S. ambassador returned there in January after an absence of nearly six years — it is unclear how much Washington can influence events or whether it would even try unless there were mass casualties.

Bordering Israel, Lebanon and Iraq and an ally to Iran, Syria has long had a vexed relationship with the United States. Washington accuses Damascus of supporting Palestinian militants, interfering in Lebanon and allowing anti-U.S. insurgents to cross its border into Iraq.

While there is no love lost between the two countries, the United States, which has already imposed extensive sanctions on Syria, has few levers to exert influence.

“The real policy choices are, do you try to get the government to back off to save itself or do you try to push this to a crisis where the government could lose its grip?” said Jon Alterman of the Center for Strategic and International Studies. “I don’t see any tools that the U.S. government has that could precipitate either outcome.”

Protests that began in the southern Syrian city of Deraa a week ago began to spread across the country on Friday, challenging the rule of the Assad family after the authorities killed dozens of demonstrators in the south.

But Middle East analysts said neither the demonstrations nor the death toll from the government backlash — at least 55 people have died in the past week in the Deraa region, according to rights group Amnesty International — was yet of a magnitude to draw a U.S. response beyond condemnation.

“I would be very reluctant to get engaged. We have a full plate, some would say an overflowing plate,” said Edward Walker, a former U.S. ambassador to Egypt and Israel, referring to the U.S.-led no-fly zone imposed over Libya this week.

Winding down the war in Iraq and with nearly 100,000 troops in Afghanistan, the United States was initially hesitant to get involved in Libya — another Muslim country — and is likely to be even more so in Syria unless civilian bloodshed escalates.

On Friday, White House spokesman Jay Carney condemned Syria’s efforts to suppress the protests, demanded an immediate end to the killing of civilians by security forces and urged the authorities to pursue negotiation with the opposition.

Brian Katulis of the Center for American Progress said the United States could target sanctions at human rights violators or try to enlist countries such as Turkey and Saudi Arabia, who have better ties, to try to influence the Assad government.

“The tipping point (for greater U.S. action) would be if you had major defections from within the regime … or if you had wide-scale popular protests that were really fundamentally challenging the structure of the Syrian government,” he said.

U.S. and European officials say that, for the moment, they do not see the Deraa protests gaining much resonance in larger and more strategic Syrian cities, including Damascus, where security men quickly stifled a small demonstration on Friday.

Nor do they see significant evidence that the most important opposition group, the Syrian Muslim Brotherhood, is playing a leading role in the protests.

Largely because of the Assad dynasty’s fearsome reputation for violently quashing protests — thousands were killed in 1982 when the elder Assad put down an Islamist revolt — U.S. and European officials said they do not currently expect the Syrian unrest to grow to the point that it threatens the survival of the government.

Walker said he saw no chance the Assads, members of the Alawite minority in Syria, would back down.

“They are a basically reviled minority, the Alawites, and if they lose power, if they succumb to popular revolution, they will be hanging from the lamp posts,” the retired diplomat said. “They have absolutely no incentive to back off.”

But one Western diplomat said he was surprised by the fact that the protests had gone as far as they had in Syria despite the government’s history of brutality, saying the mood in the country had changed.

“They’ve crossed the fear line, which in Syria is remarkable,” the diplomat said. Reuters