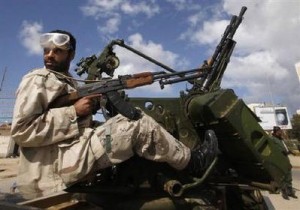 Libya’s pro-democracy fighters have formed an “interim government” even as forces backing the country’s leader, Muammar Gaddafi, press ahead with attacks against them.

Heading up the new government as an interim prime minister is Mahmoud Jibril, who had been working as a representative to foreign powers.

He is best known on the international stage for meeting Nicolas Sarkozy, the French president, which led to France diplomatically recognising the rebels’ transitional council as the sole representative of the Libyan people.

Opposition spokesman Nisan Gouriani told Al Jazeera: “The provisional national council is a legislative body, but we need an executive body to take control and provide an administration.”

He said the rebels’ “position has been very clear from the beginning – that Libya is one unit”.

“Our capital is Tripoli and will forever be Tripoli,” he said. “We are striving to liberate the western parts of the country, and Tripoli, and keep the country united. We would like to emphasise this over and over again.”

The rebels had been wary of calling their nascent administration in their Benghazi stronghold an interim government seemingly cautious of signifying a split in the country.

“But they remain committed to one Libya,” said Al Jazeera’s James Bays, reporting from Benghazi. “They want the people of Libya to remain united, just without Gaddafi.”

Undaunted by air strikes launched by coalition warplanes aimed at enforcing a no-fly zone, pro-Gaddafi forces pressed ahead with their assaults on the towns of Misurata, Ajdabiya and Zintan in the past 24 hours.

Pro-democracy fighters ranged against Gaddafi are finding the going tough.

Mostly outgunned and with little command structure, they have been left to run sporadic raids against Gaddafi’s troops, before falling back to their original lines.

But despite the little headway made by them, a rebel commander described the men as “real heroes”.

“They are brave to the point of being suicidal,” Mohamed Hariri told Al Jazeera.

Amid raging fighting, Gaddafi insisted he was “ready for battle, be it long or short”.

“We will win this battle,” he said in an address during a public appearance at his Bab Al-Aziziyah compound in Tripoli that was the target on Sunday of a coalition missile strike, Libyan state television reported.

He also railed against the coalition forces, saying: “This assault … is by a bunch of fascists who will end up in the dustbin of history.”

“Gaddafi’s forces have now taken over hospital in the town, and positioned snipers on the roof and tanks outside,” said our correspondent.

“The rebels are calling for a hospital ship to be sent in, as they still control the port, and say that would save many lives, as they now have nowhere to take their injured.

“More civilian deaths have been reported in Ajdabiya and elsewhere, and they are calling on international powers to interpret the UN resolution more widely to support them with further attacks against Gaddafi’s troops.”

The no-fly zone is intended to protect civilians from attack by forces loyal to Gaddafi. The United States announced on Tuesday that it is shifting its focus to widen the no-fly zone across the north African country.