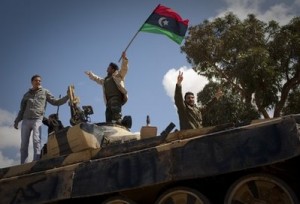 Libyan government forces have fallen back from the rebel-held city of Benghazi, following air raids by Western-led forces.

Rebel fighters on Monday tried to follow up the retreat by forces loyal to Muammar Gaddafi, the Libyan leader, advancing on government forces in Ajdabiya, but they retreated in disarray when they came under heavy fire.

Tony Birtley, Al Jazeera’s correspondent, reporting from an area close to Ajdabiya said there was fierce fighting outside the city.

“There’s been heavy fighting and heavy shelling going on … the rebels told me there have been heavy casualties and there are a number of corpses between here and the town [of Ajdabiya] that they have been unable to reach.”

He said the road between Benghazi and Ajdabiya was littered with the “burned-out wreckage of what was Gaddafi’s armour and tanks”, destroyed in air raids by coalition forces.

Shamsudin Abdulmola, from the opposition national council, told Al Jazeera: “The Libyan free forces seem to be allowing the coalition to clear the road ahead of heavy artillery and military forces which were planning to attack civilian populated areas.

“They’re holding back until the roads are cleared out and then the advance of the volunteers takes place.”

Coalition jets continued to patrol the UN-sanctioned no-fly zone over Libya, but launched no new attacks after air raids over the weekend scattered Gaddafi’s forces.

Libyan authorities invited journalists to visit the site of the attack early on Monday morning.

Mussa Ibrahim, a spokesman for Gaddafi, called the attack a “barbaric bombing” but said no one had been hurt.

He declined to say whether Gaddafi himself was inside the compound, the same site that was bombed by the US in 1986.

Recent events have made apparent divisions among the Western coalition leaders carrying out the UN-sanctioned military action in Libya and other world powers.

The UN-backed air raids mounted so far against Gadhafi’s force have been by Britain, France and the US, acting outside of their NATO roles.

Calls for the NATO alliance to take over the enforcement of the no-fly zone have been declined by Turkey, while other members have expressed concerns over whether NATO aircraft and equipment would be diverted from other missions, including the one in Afghanistan.

William Hague, the British foreign minister, refused to rule out using the coalition air raids to target Gaddafi, saying it depended on “circumstances at the time”.

But Robert Gates, the US defence secretary, said such action would be “unwise” and Laurent Teisseire, the French defence ministry spokesman, said “the answer is no,” when asked about the subject.

Later British General Sir David Richards, the head of Britain’s armed forces, said that Gaddafi was “absolutely not” a target for military action.

The US has been clear that it sees the goal of the mission as the departure of Gaddafi, with Barack Obama, the US president, saying on Monday that the Libyan leader “needs to go”.

He also said that the US expects to transfer its lead role in the military action on Libya to its allies.

In Russia, Vladimir Putin, Russia’s prime minister, criticised the UN resolution that sanctioned the use of force in Libya, calling it a “medieval call to crusade”.

“The resolution by the Security Council, of course, is defective and flawed,” Russian news agencies quoted Putin as telling workers on a visit to a missile factory.

“To me, it resembles some sort of medieval call to crusade when someone would appeal to someone to go to a certain place and free someone else.”

Dmitry Medvedev, the Russian president, later said reference to “crusades and so forth” was unnaceptable, but although it appeared to be a rebuke, he did not mention Putin by name.

The UN resolution imposing the a no-fly zone on Libya was passed after Russia, which has a veto, abstained during the Security Council vote.

Elsewhere, Amr Moussa, the Arab League chief, questioned the need for a bombardment of positions in Libya by coalition forces, saying they risked killing civilians.

US Navy Vice Admiral William Gortney, the staff director for the joint chiefs of staff, said at a Pentagon news conference there is no evidence civilians in Libya have been harmed in the air assault.

“The Arab League position on Libya was decisive and from the first moment we froze membership of Libya … Then we asked the United Nations to implement a no-fly zone,” he told a news conference with Ban Ki-moon, the UN secretary general.

Guido Westerwelle, Germany’s foreign minster, speaking in Brussels, defended his country’s decision not to back air raids against Gaddafi’s forces.

He said that the Arab League criticism of the air attacks had vindicated Germany’s reluctance to back the action, but Germany stood with other European Union countries in tightening sanctions against the Libyan government.

Al Jazeera’s Laurence Lee, reporting from Brussels, said: “There’s lots of cracks just developing, some of them inside the European Union and some of them outside.

“The comments by Vladimir Putin, for example – who is prime minister, remember, he’s not the president so he’s supposed to be in charge of domestic, not foreign policy … demonstrate how this campaign in Libya is driving wedges between people who are supposed to be allies nowadays.”

In a meeting called by China, the UN Security Council is to discuss the situation in Libya on Monday, in response to a letter from Libya and a Russian request, according to a diplomatic sources.