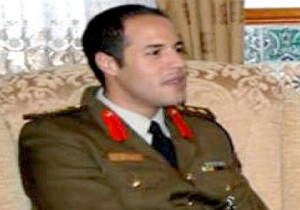 The sixth son of Muammar Gaddafi has reportedly been killed in a suicide air mission on his barracks in Tripoli.

Khamis, 27, who runs the feared Khamis Brigade that has been prominent in its role of attacking rebel-held areas, is said to have died on Saturday night, according to media reports.

According to reports on Algerian TV, a Libyan air force pilot crashed his jet into the Bab al-Aziziya compound in Tripoli in a kamikaze attack.

Khamis allegedly died of burns in hospital. The Gaddafi regime has denied the reports