Lebanese mothers demand info on fate of loved ones 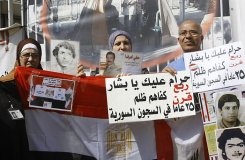 About 30 Lebanese women gathered in Beirut on Monday, Mother’s Day, demanding information on the fate of their children and loved ones who went missing during the country’s civil war and who are presumably being held in Syria.

“Even if I am 100 years old I will keep looking for Mustafa,” she said, her eyes filled with tears. “For me, Mother’s Day is not a happy day.”

Hana, who did not give her last name, is among a group of Lebanese women who for the past six years have organised a sit-in outside the UN building in downtown Beirut in the hope of getting information on some of the 650 people who vanished during the 1975-1990 civil war.

Damascus at the time held significant sway over its smaller neighbour and human rights groups believe many of the missing are being held in Syrian prisons.

Syria denies holding them, but in recent years a number of those listed as missing have been released from jails there.

Several of the mothers and family members interviewed on Monday said they feared that anti-regime demonstrations in Syria in recent days could undermine their cause.

“I am scared that we will get less and less information now,” said Rabiha Riachi, whose husband Toni disappeared in 1985.

The families of many of those missing say they have proof that their loved ones are being held in secret detention centres in Syria, and appealed for compassion from President Bashar al-Assad.

“Bashar, have mercy on us, enough injustice after 25 years in Syrian prisons,” read one banner.

Marie Ghaoui, 67, whose son Georges was kidnapped in 1983 at the age of 18, wondered how the leadership in Lebanon and Syria could simply ignore those missing.

“The first Mother’s Day gift Georges gave me was a set of teacups,” she added.

For Samia Abdallah, whose brother Imad was kidnapped in 1984 at the age of 20, the hardest thing to bear is that their mother died nine years ago with no news from her son.

“In 2003, after our mother died, he wrote two letters and gave them to someone visiting another inmate at a prison in Syria,” she said.

“So we know he’s alive. We’re waiting for him.”

Photo: Lebanese protesters whose loved ones are missing since the 1975-1990 civil war, including some thought to be held in Syrian prisons, demonstrate outside the UN offices in downtown Beirut on the occasion of Mother’s Day. Arabic writing on banner reads: “Have mercy Bashar (in reference to Syrian President Bashar al-Assad), quarter of a century in Syrian jails.. enough injustice