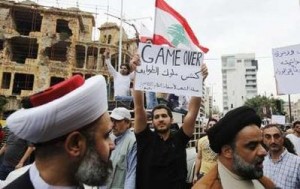 Thousands of Lebanese turned out on Sunday in Beirut to protest the tribal and religious figureheads that embody the country’s entrenched sectarian political system.

Critics say the confessional power-sharing agreement enshrined in the constitution and laws of Lebanon allows a small elite to dominate politics, dividing the spoils of the state among themselves and weakening the government while strengthening the systems of patronage that keep them in power.

“Today we are marching against the symbols of the sectarian system, which are the leaders, and for full equality between men and women, including the right for women to pass on their nationality,” said Bassem Chit, one of the protest organizers.

Monday is Mother’s Day in Lebanon. Under current Lebanese law, women who marry foreign men are not allowed to pass their citizenship to their spouses or their children, ostensibly to preserve the current sectarian balance between Muslims and Christians. Marriage, divorce and child custody are also handled by religious courts. 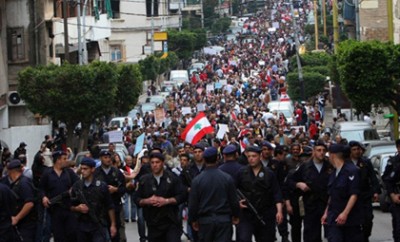 But Lebanon’s sectarian “regime” rules by a tyranny of chaos rather than a monolithic autocracy that can be toppled. More often than not, the parties in power are locked in political stalemate, playing on sectarian fears to mobilize their bases while blaming the lack of social and legislative progress on the intransigence of their opponents.

“There is a lot of discussion” on how to dismantle institutionalized sectarianism, Chit said. “We don’t expect the system to fall in the coming days.” LAT

Top Photo: A Sunni (L) and Shi’ite (R) Muslim sheikh take part in a march against Lebanon’s sectarian political system and alleged corruption, in Beirut, March 20, 2011. The sign (C) reads, “Game over. Get rid of the kings of sectarianism”. The people campaign to bring down the sectarian system