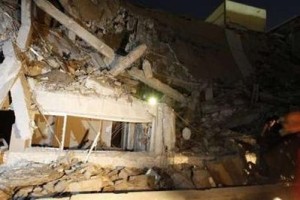 An air strike against an administrative building in a compound including Muammar Gaddafi’s residence in Tripoli has destroyed the Libyan leader’s “command and control capability”, a coalition official says.

“The coalition is actively enforcing UNSCR [UN Security Council Resolution] 1973, and that in keeping with that mission, we continue to strike those targets which pose a direct threat to the Libyan people and to our ability to implement the no-fly zone,” the official added.

The building, which was about 50 metres from the tent where Colonel Gaddafi generally meets guests, was flattened.

An AFP journalist on Sunday saw smoke billowing from the residence and barracks at Bab el-Aziziya in the south of the Libyan capital as anti-aircraft guns fired shots.

Photo: A view of the building, destroyed in what the government said was a western missile attack, inside Bab Al-Aziziyah, Muammar Gaddafi’s heavily fortified Tripoli compound March 21, 2011.