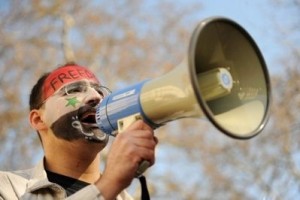 “Just God, Syria and Freedom,” and “Revolution, revolution” chanted the demonstrators, according to the resident who also saw security forces stationed at the entrance of the town as it entered its fourth day of protests.