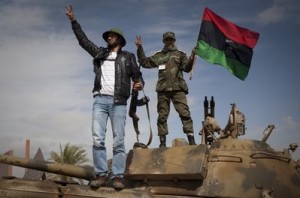 The allied assault on Libyan air defenses has two goals: preventing further attacks by Libyan forces on rebels and other civilians, and degrading the Libyan military’s ability to contest a no-fly zone, Pentagon officials said yesterday.

Navy Vice Admiral William E. Gortney, director of the Pentagon’s Joint Staff, said US and British ships and submarines had launched the first phase of the missile operation to clear the way for the imposition of the UN-mandated no-fly zone.

The United States has struck Libya before. Former President Reagan launched US airstrikes on Libya in 1986 after a bombing at a Berlin disco — which the United States blamed on Libya — that killed three people, including two American soldiers. The airstrikes killed about 100 people in Libya, including Moammar Khadafy’s young adopted daughter at his Tripoli compound.

The US military said 20 sites were hit as the missile strikes targeted air defense installations on or near the Mediterranean coastline, many in the western half of the country that is Khadafy’s stronghold.

The French were focusing on the rebel-held east.

A chief target of yesterday’s cruise missile attack was Libya’s SA-5 surface-to-air missiles, which are considered a moderate threat to some allied aircraft. Libya’s overall air defenses are based on older Soviet technology, but Gortney called them capable and a potential threat to allied aircraft.

Cruise missiles are the weapon of first choice in such campaigns; they do not put pilots at risk, and they use navigational technologies that provide precision.

The first Tomahawk cruise missiles struck at 3 p.m. EDT, Gortney said, after a one-hour flight from the US and British vessels on station in the Mediterranean.

The United States has at least 11 naval vessels in the Mediterranean, including three submarines, two destroyers (USS Barry and USS Stout), two amphibious warfare ships (the USS Kearsarge and USS Ponce), and the USS Mount Whitney, a command-and-control vessel that is the flagship of the Navy’s Sixth Fleet.

Also in the area are Navy P-3 and EP-3 surveillance aircraft, officials said.

Gortney said it would take as long as 12 hours to assess the effectiveness of yesterday’s strikes. Then a high-altitude Global Hawk unmanned surveillance plane would overfly the target areas to get a more precise view, the admiral said.

He would not say how long the attacks on Libyan air defenses would last, but he stressed that the missile assault was the first phase of a multistage mission.

Italy offered the use of seven air and navy bases already used by US, NATO, and Italian forces. They include the US air bases at Sigonella, Sicily, and Aviano in northern Italy; and the Italian air bases in Amendola near Foggia, Decimomannu in Sardinia, Gioia del Colle near Bari, a base on Sicilian island of Pantelleria, and the military airport of Trapani, Sicily.

The Sigonella’s size and proximity to Libya makes it a key staging point for any possible international strikes, but other bases were being readied as well.

Five new American F-18s, two C-17s and a C-130 cargo plane landed yesterday at Aviano, which is home to the 31st Fighter Wing.

One fired on a Libyan military vehicle in the first military strike of the operation.

It will deploy the Charles de Gaulle aircraft carrier to the region today from Toulon. It also envisages using antiair frigates Jean-Bart and Forbin, antisubmarine frigate Dupleix, the Aconit frigate and a refueling ship La Meuse.

Britain’s air base in southern Cyprus, RAF Akrotiri, is supporting AWACS surveillanceaircraft, and Britain has ateam of personnel there to coordinate British aircraft movement.

Two British frigates, HMS Westminster and HMS Cumberland, are in the Mediterranean off Libya’s coast. boston.com