by yalibnan
1051
With Saturday's start of airstrikes against Ghadafi, Obama appears to be putting into practice a foreign-policy doctrine he first sketched during the 2008 presidential campaign.
Share: 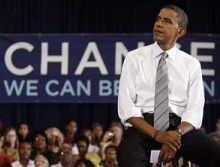 By ADAM ENTOUS And LAURA MECKLER

From the start of White House deliberations about how to respond to the crisis in Libya, President Barack Obama set two clear parameters for his top advisers: he didn’t want to use military force if the U.S. had to be in the lead and he had no intention of sending American ground troops.

With Saturday’s start of airstrikes against Libyan leader Col. Moammar Ghadafi, Mr. Obama appears to be putting into practice a foreign-policy doctrine he first sketched during the 2008 presidential campaign.

Facing off against then-fellow Sen. Hillary Rodham Clinton in a debate for the Democratic primary, Mr. Obama said he didn’t want to just end the war in Iraq. “I want to end the mind-set that got us into war in the first place,” he said.

In contrast to his predecessor, President George W. Bush, who invaded Iraq in 2003 despite opposition from many allies and Democrats, Mr. Obama is taking pains to receive unambiguous legal authority through the United Nations, getting clear support from Arab states and then letting others—France and Britain —lead the military charge.

The approach risks opening Mr. Obama to criticism from the right, in particular, but also from the brand of liberal internationalism that animates some of his advisers. Potential Republican presidential candidates for 2012 have criticized the president in recent days for appearing tentative and not pushing America’s traditional role of international peacekeeper.

It also isn’t clear that the U.S. will be able to hold back and let the international coalition take charge if the effort falters.

In a three-minute statement to the media on Saturday after the first cruise missiles were launched, Mr. Obama six times noted international support for the use of force, saying the attack on Libya was an “international effort” and that the U.S. was acting with a “broad coalition” that included European and Arab partners. Mr. Obama and his aides also said he and top advisers had consulted with bipartisan leaders in Congress.

“Make no mistake: Today we are part of a broad coalition,” Mr. Obama told reporters traveling with him in Brazil, where Mr. Obama was beginning a five-day previously scheduled swing through Latin America. He spent most of Saturday talking with Brazilian officials and executives about trade and other matters.

Mr. Obama appeared content Saturday to be seen as following French President Sarkozy, who issued the first order of the day to strike at Col. Gadhafi’s forces and protect the rebel capital of Benghazi.

In 2003, then-French President Jacques Chirac opposed Mr. Bush’s drive to war in Iraq, as did Mr. Obama, who at the time was a state senator from Illinois just beginning a long-shot U.S. Senate campaign.

The cruise-missile strikes ordered by Mr. Obama against Col. Gadhafi’s air defenses Saturday were the first major show of American force in the military campaign. “We’re the only nation with the capacity to fire that many,” a military official said, explaining why the U.S. was taking the lead for now.

They were also the first military action authorized by Mr. Obama that weren’t connected with a war that began before his presidency.

Officials said the timing of the strikes was dictated by Col. Gadhafi and reflected Western surprise at the speed at which he moved his forces against Benghazi, the rebel capital in eastern Libya.

The U.S. launched the missiles after concluding early Saturday that “the regime had no intention of complying with their so-called cease-fire announcement,” a senior defense official said.

“It wasn’t so much about planning to initiate operations on a ‘date certain,’ as it was about determining if the regime would heed the warnings of the international community and comply” with a U.N. resolution, the official said.

Top military officials described the cruise-missile strikes as “the leading edge” of a multiphase campaign against Col. Gadhafi. But the officials stressed that Mr. Obama’s goal was to create conditions quickly that would allow the U.S. to step back and assume largely a backup role.

Washington wants France, Britain, Canada and other coalition partners to take responsibility for day-to-day enforcement of the no-fly zone over Libya. Officials described America’s longer-term role as providing logistical support, such as refueling allied planes and provide intelligence from drones.

Officials did, however, acknowledge that developments on the battlefield could force the U.S. to expand its involvement, from firing more cruise missiles to launching strikes with American stealth aircraft.

Saturday’s strikes formally fell under the operational control of Gen. Carter Ham, the commander of the U.S. Africa Command, which is based in Stuttgart, Germany. But the Pentagon hopes to move in the coming days to a coalition commander who is “preferably not U.S.,” a senior military official said.

Ben Rhodes, deputy national security adviser for strategic communications, said Mr. Obama’s foreign-policy doctrine is at work in the president’s insistence on seeking broad-based support for military action, as well as in his reliance on international institutions and his focus on humanitarian relief and “preventing mass atrocity.”

White House advisers said the administration’s approach was shaped in large part by fears that Western inaction against Col. Gadhafi would lead to a bloodbath in Benghazi. That prospect alarmed policy makers in the White House, in particular those who made their reputations in part by arguing that the West’s inaction during the Rwandan genocide in the 1990s made the West morally complicit.

That context was reflected in Mr. Obama’s acceptance speech for the 2009 Nobel Peace Prize, after he authorized an escalation of the U.S. war in Afghanistan.

“I face the world as it is, and cannot stand idle in the face of threats to the American people,” Mr. Obama said, outlining his rational for using force. “For make no mistake: Evil does exist in the world.”