What does the Libyan no-fly zone UN resolution mean, Q/A 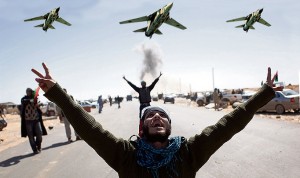 Libya’s embattled regime declared a cease-fire Friday as an international coalition was preparing to enforce a United Nations-backed no-fly zone to protect civilians in the war-torn country.

Pro-government forces were thought to be on the brink of an assault on Benghazi — a city of one million people seized by the opposition during the uprising — and had reportedly launched air attacks.

Despite the announcement of a cease-fire, there were reports of fighting Friday in western and eastern Libya.

What did the Security Council vote on?

Acting under Chapter VII of the U.N. Charter, which provides for the use of force if needed, the Council adopted Resolution 1973 by 10 votes to zero, with five abstentions, authorizing member states “to take all necessary measures” to protect civilians and civilian populated areas under threat of attack …while excluding an occupation force.”

The resolution follows an arms embargo that the Council imposed last month when it unanimously approved sanctions against Libya, freezing the assets of its leaders and referring the ongoing violence against civilian demonstrators to the International Criminal Court (ICC).

What does the resolution mean?

An U.N.-backed international force will enforce a no-fly zone over Libya which will effectively ground Libya’s military aircraft. All flights — except those for humanitarian purposes — will be banned from Libyan airspace.

This force will also have the power to launch air strikes against Libyan ground forces — from tanks, artillery and missiles to their communications and command and control infrastructure — if they are considered to be a threat against the civilian population.

“It’s intended to force Gadhafi back and tilt the balance in the rebel’s favor,” said Barak Seener, Research Fellow in Middle Eastern Studies at the Royal United Services Institute (RUSI) in London.

“I think it will embolden protesters across the Arab world as it is a precedent to oppressive regimes,” he told CNN. “The resolution is saying human rights violations will not go unabated and there will be a response.”

Who backed the Security Council vote?

Ten of the 15 council members, led by the U.S. and Britain and France, voted in favor of the no-fly zone.

“Any decision to put the men and women of our armed services into harms’ way should only ever be taken when it’s absolutely necessary,” British Prime Minister David Cameron said in a statement to the country’s parliament after the vote.

“But we simply can not stand back and let a dictator whose people have rejected him, kill his people indiscriminately.”

China, Russia, Germany, India and Brazil abstained from the Security Council vote citing concerns about a protracted conflict in Libya. “We oppose the use of armed force in international relations and we have serious reservations about some of the content of the resolution,” said Jiang Yu, a spokeswoman for the Ministry of Foreign Affairs.

“We support the U.N. Secretary-General’s Special Envoy to Libya, African Union and Arab League to resolve this crisis peacefully,” she said. “We hope that the situation in Libya will return to stability as soon as possible to avoid more serious escalation of armed conflict and humanitarian crisis.”

Who will police the no-fly zone?

The U.S. and NATO partners have contingencies in place to act within hours, according to an administration official familiar with planning. President Barack Obama will insist on a major Arab role in any no-fly zone, the official said.

Cameron said Britain had started preparations to deploy aircraft, and “in the coming hours” they will move to air bases where they will be positioned for any “necessary action.”

Meanwhile all 39 member states of European Air Traffic organization Eurocontrol, which includes the European Union’s 27 nations as well as Russia, asked the agency to “ban all flights” flying over and heading to Libya, a spokeswoman said, in quotes carried by Agence France-Presse.

Eurocontrol also said Libya has closed its airspace to all traffic in response to the U.N. vote.

Will other Arab countries be involved?

The Arab League’s U.N. ambassador, Yahya Mahmassani, said two Arab countries would take part in a no-fly zone operation, but he was not sure which two. The Arab League last week called for a no-fly zone following reports of Libyan air attacks on urban areas.

“Their involvement will be largely symbolic but extremely important,” said Seener. “We’re probably looking at involvement from Qatar, UAE and perhaps Saudi Arabia and Egypt.”

“Autocrats and Islamists cannot create a false narrative of western colonialism. Rather Gadhafi is deeply unpopular in the Arab world, and the West is fostering a human rights narrative for opposition movements around the Arab world to advance more forcefully. It is also ensuring that the trajectory of opposition will go down a human rights path rather than one of resistance in the form of Islamism or radical nationalism.

“This also serves as a declaration to authoritarian regimes throughout the region that the West is not an ineffectual foe or paper tiger and will not overlook human rights abuses for the sake of relative short-termed stability.”

Is Gadhafi bluffing with the cease-fire?

Libyan Foreign Minister Moussa Koussa, speaking to reporters Friday in Tripoli, said that in light of its membership in the United Nations, the country is “obliged to accept the Security Council resolution that permits the use of force to protect the civilian population.”

Koussa says Libya was disappointed with the imposition of a no-fly zone, arguing that it will hurt the civilian population. He also said the use of military power violates the country’s sovereignty and goes against the U.N. charter, but he acknowledged that some countries may yet intervene.

However Seener said this was simply a survival tactic by the Gadhafi regime.

“It is a tactic to blunt the western response. There is no way the regime is willing, in a constructive manner, to engage with the opposition and share power.

“They are simply geared towards maximizing their own power and coercing their own people. It would be folly to leave the rebels in a vulnerable position.”

Who will foot the bill for the fly-zone?

Participating countries will have to pay their own costs, said Seener. However he added that the U.S. would be doing most of the “heavy lifting” in terms of its military contribution.

But with the U.S. and its NATO allies such as Britain heavily involved in Afghanistan, Seener said the issue of military intervention in Libya had been heavily politicized in some countries. “Some sections of press in the UK have said British forces are already over-committed and defense spending needs to be increased, while others say we can’t engage in Libya because we’re stretched and need to focus on Afghanistan.”

He said the reality is Britain does have the capacity to commit to the campaign in Libya without compromising its role in Afghanistan. CNN