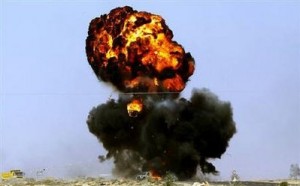 Forces loyal to Muammar Gaddafi, the Libyan leader, have continued a large-scale military offensive against rebels in the country’s east, launching air strikes at the oil-producing towns of Ras Lanuf and Brega.

Early on Friday, rebel forces were said to be retreating from Ras Lanuf, but fierce clashes were reported later on, when they launched a counter-offensive against the pro-Gaddafi forces. They had earlier lost control of pockets of residential areas, and were clinging on in other parts of the town, sources told Al Jazeera.

Plumes of smoke were seeing billowing from an oil installation in the city, reportedly the result of military air strikes. Earlier in the day, Ibrahim Said, the deputy director of the hospital in nearby Ajdabiya, said that rebels were still in control of the strategically important oil refineries and storage depots in Ras Lanuf.

Ibrahim al-Alwani, a rebel fighter, said he and comrades still in Ras Lanuf had seen government troops in the town centre.

“I saw maybe 150 men and three tanks,” he told Reuters on Friday morning. “I can hear clashes.”

The government troops had landed by boat near the Fadeel hotel in Ras Lanuf on Friday, a spokesperson told Reuters.

“Four boats carrying 40 to 50 men each landed there. We are fighting them right now,” Mohammed al-Mughrabi said. Rebels appear to have withdrawn to their last main checkpoint, about 15km to the east of the town’s centre.

“They came from the air, they came from the sea, and there were rockets everywhere. It was a big surprise for us,” one rebel fighter, Mustafa Mehrik, a 39-year-old coffeeshop owner, said in Brega, a rebel-held town to the west where many of the casualties from the attack were taken.

“Everyone is worried. Today they say there will bring heavy weapons from Benghazi.”

Foreign journalists faced significant hurdles getting information out of Ras Lanuf, but Libyan state television aired footage on Friday of people fleeing the city and of pro-Gaddafi forces searching houses for weapons.

Pro- and anti-government forces are locked in intense fighting for control of several other cities and towns along the coastline to the east of Tripoli, including Bin Jawad. In Az Zawiyah, to the west of Tripoli, the revolt appeared all but crushed, witnesses said. An oil refinery there has resumed operations, according to an official.

It appears that with fresh clashes reported in Misurata, Ras Lanuf and Brega, the frontline is now advancing eastwards, towards Benghazi, a rebel stronghold.

Benghazi was the place where the protests against Gaddafi first began last month, quickly escalating into a a mass uprising against his more than 41-year-old rule.

Hoda Abdel-Hamid, Al Jazeera’s correspondent in Benghazi, said that thousands of people had gathered there on Friday in support of the rebel forces, expressing optimism that they could hold on to the city if attacked by Gaddafi’s military.

“Many people have died in our struggle in Ras Lanuf and in Benghazi, but the youth has chosen to fight on rather than see this rule continue, and they will fight for the sake of God,” a blind imam proclaimed ahead of Friday prayers.

“But if you look at the country and what’s happening … the Gaddafi forces are certainly trying to keep or to regain control of all the oil facilities around the country,” Abdel-Hamid reported.

For Gaddafi’s forces to retake Tobruk, Libya’s eastern-most oil port, they would have to pass through Benghazi, she said.

Benghazi has been serving as a rear support base for many rebels travelling to and from the front lines.

Abdel-Hamid reported that if Ras Lanuf was lost entirely, it would likely strike a strong blow to the rebels’ morale. The rebels readily admit that they do not have the firepower to counter the pro-Gaddafi forces, she added.

Buoyed by the successes on the frontline, a confident-looking Saif al-Islam Gaddafi, the son of Muammar Gaddafi, levelled fresh charges against the rebels on Friday.

Addressing journalists at a press conference he alleged that anti-government militias had been mutilating the bodies of opponents.

He also said the actions of the rebels to seize miltiary ammunition depots and bases were not the actions of “advocates of democracy” or “reformists”.

He said that thousands of people were being held “hostage” by the rebels.

In an earlier interview with Reuters on Thursday, Saif al-Islam declared that the time had come for full-scale military action against the rebels.

Also on Thursday, Khalid al-Kaim, the country’s deputy foreign minister, reiterated the government stance that it was “clear” that most anti-government protesters and fighters were members of al-Qaeda.

Meanwhile, on Friday the United Nations warned that the crisis in Libya would likely have a “significant” impact on food security in the country.

“In Libya, the situation may lead to a sudden disruption of imports and the collapse of the internal distribution system,” Daniele Donati, head of the Food and Agriculture Organisation’s emergency operations, said in a statement.

“Depletion of food stocks and loss of rural manpower are all factors that in the longer-term could seriously affect food security,” he said.

“The ongoing crisis will likely have a significant impact on food security in Libya and in nearby crisis-affected regions,” he added.

Libya imports approximately 90 per cent of its food, and the UN has issued an appeal for funds to combat the humanitarian crisis in the country, of which the food security component is $47.92 million.

Photo: A rebel vehicle is hit by a shell fired by soldiers loyal to Libyan leader Muammar Gaddafi, during a battle along the road between Ras Lanuf and Bin Jiwad March 10, 2011