Tsunami: What Causes the Deadly Waves? 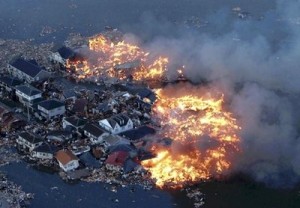 A powerful tsunami spawned by the largest earthquake in Japan’s recorded history slammed the eastern coast Friday, sweeping away boats, cars, homes and people as widespread fires burned out of control. Tsunami warnings blanketed the entire Pacific, as far away as South America, Canada, Alaska and the entire U.S. West Coast.

The U.S. Geological Survey (USGS) said the 2:46 p.m. quake was a magnitude 8.9, the biggest earthquake to hit Japan since officials began keeping records in the late 1800s. Geologist Harley Benz told Fox News it was the fifth largest earthquake in the last 100 years.

Earthquakes and tsunamis can often go hand-in-hand. But why does one quake generate huge waves while another does not?

Tsunamis, which can travel over the ocean surface from many hundreds of miles, can be generated when chunks of the planet’s crust separate under the seafloor, causing an earthquake. Here’s what happens: One slab of lifting crust essentially rapidly acts as a giant paddle, transferring its energy to the water.

Tsunamis can also be caused by volcanic eruptions, underwater detonations and even landslides.

The resulting waves are hard to predict for several reasons. Nobody knows how a quake has affected the seafloor until hours, days or even months after the event. And a tsunami is almost imperceptible on the open ocean, rising to full ferocity only as it nears the shore.

While more tsunami-sensing buoys cover the ocean than before the devastating 2004 Indian Ocean tsunami, these waves can still be missed.

Not all seafloor earthquakes will generate a tsunami — if the friction between the crustal plates occurs very deep below the ocean floor or move in a way that causes a minimal paddle effect, a tsunami isn’t as likely to form.

The 2004 quake just off the coast of Sumatra, Indonesia, was colossal, eventually put at magnitude 9.3. But an 8.7-magnitude earthquake in 2005 that originated at the same location, while large enough to generate a devastating tsunami, scientists say, did not do so. The exact reasons remain mysterious.

The 2004 tsunami, and those spurred by the 9.2-magnitude Great Alaska Earthquake in 1964, were examples of teletsunamis, which can cross entire oceans.

Several devastating tsunamis have occurred throughout recorded history, including one that leveled Lisbon, Portugal in 1755 and one generated by the explosion of Krakatoa in Indonesia that drowned an estimated 36,000 people.

Except for the largest tsunamis, such as the 2004 Indian Ocean event, most tsunamis do not result in giant breaking waves; instead they come in much like very strong and fast-moving tides, according to the U.S. Geological Survey. As a tsunami nears the shoreline, the rising seafloor forces a wave that might have been just inches tall into a monster that can be several feet high.

The Pacific Ocean basin is particularly prone to tsunamis; a study earlier this year found that the tsunami risk to the west coast of the United States was higher than previously thought.

Photo:Houses are in flame while the Natori river is flooded over the surrounding area by tsunami tidal waves in Natori city, Miyagi Prefecture, northern Japan, March 11, 2011, after strong earthquakes hit the area. (AP Photo/Yasushi Kanno)