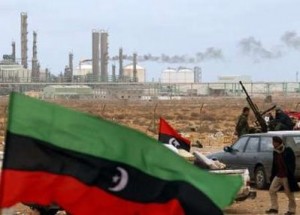 Libyans battling Moammar Gadhafi are losing patience with the United States and its allies, saying they are missing a key opportunity to topple a dictator and win the gratitude of a new democracy in the Middle East.

Libyans battling Moammar Gadhafi are losing patience with the United States and its allies, saying they are missing a key opportunity to topple a dictator and win the gratitude of a new democracy in the Middle East.

“People are losing faith in the international community,” said Mustafa Gheriani, a spokesman for the rebel movement in Libya.

People in eastern Libya, where rebels are in control of a large chunk of the country, have urged the international community to impose a no-fly zone. Some also want the countries to bomb key targets in the capital of Tripoli.

“They are not pleased with all the procrastination,” Gheriani said. “What are they waiting for?”

Gadhafi appeared to be keeping up the momentum he has seized in recent days in his fight against rebels trying to move on the capital.

Gheriani said Wednesday that government artillery hit a pipeline supplying Sidr from oil fields in the desert. He said an oil storage depot was also hit, apparently by an airstrike.

Also Wednesday, a high-ranking member of the Libyan military flew to Cairo with a message for Egyptian army officials from Gadhafi, but no further details were known.

President Obama’s most senior advisers were meeting Wednesday to outline what steps are realistic and possible to pressure Gadhafi to halt the violence and give up power.

They planned to examine the ramifications of a no-fly zone over Libya and other potential military options, U.S. officials told the Associated Press, speaking on condition of anonymity to discuss internal administration deliberations.

Britain and France are pushing for the U.N. to create a no-fly zone over the country. While the U.S. may be persuaded to sign on, such a move is unlikely to win the backing of veto-wielding Security Council members Russia and China, which traditionally object to such steps as infringements on national sovereignty.

Gadhafi said in a Turkish television interview that Libyans would fight back if Western nations imposed a no-fly zone to prevent his regime from using its air force to bomb government opponents staging a rebellion.

He said imposing the restrictions would prove the West’s real intention was to seize his country’s oil wealth.

Rebel forces made quick progress in the first three weeks of the revolution, but in recent days their offensive has stalled as they met resistance from Gadhafi loyalists closer Tripoli. On Wednesday fighters in Benghazi, the defacto capital of rebel-held territory, began firing weapons in the air and celebrating after receiving word their forces took Bin Jawwad.

That would represent a step closer to Tripoli for the rebels, but the town has changed hands several times in recent days as both sides try to regain momentum.

It is difficult to get independent information to confirm the various claims.

The two sides traded barrages of artillery shells and rockets about 12 miles west of the oil port of Ras Lanouf, an indication that regime forces were much closer than previously known to that city. Ras Lanouf is the westernmost point seized by rebels moving along the country’s main highway on the Mediterranean coast.

Warplanes streaked overhead and a yellow fireball erupted at or near the location of a small oil terminal, according to the Associated Press. Pillars of black smoke also rose from the direction of the town of Bin Jawwad, about 40 miles to the west.

The violence in Libya has taken a toll on the country’s oil production. For the past week, government forces and rebels have been battling around several key oil ports that account for almost 60% of the country’s crude oil exports.

In the Turkish interview, Gadhafi appealed to the Libyan people “to take up arms and fight” to protect the vast oil reserves.

For many Libyans the fight is more complicated than that.

President Reagan helped to highlight Gadhafi as a international pariah and sponsor of terrorism, but the United States is mostly blamed for missing Gadhafi when he was targeted in April 1986.

“We would be happy if Gadhafi was killed, but no one liked Reagan when he bombed Libya,” said Khalid Ali, a 28-year-old clothing store owner.

Others feel the United States should join the fight for freedom.

“The United States has a lot it can do to support the Libyans,” Ali said. “I wonder why they are taking it slow?” USAtoday